Contest inspires Down Under vision

This weekend’s 2019 Eurovision Song Contest has prompted a Brisbane musician to launch a campaign for Australia to start its own version of the annual multi-national competition.

Vince Agarol (main picture), composer of the as-yet-unproduced musical based on the life of Brisbane’s infamous Poo Jogger, said there was no reason a Eurovsion-style contest would not work in Australia.

“We produce songs right here in Australia that are just as shitty as those that get to the Eurovision finals,” Mr Agarol said.

“I know all about shitty songs, given I spent months writing and seeking backing for my Poo Jogger musical.”

Mr Agarol said a local song contest based on the Eurovision model would be just as successful and would gain the same high level of public backing.

“The reason Eurovision works is very simple. Every year dozens of nations vie to have their inane, crappy song chosen as the winner and everyone in each competing country goes wild and gets behind their own crappy song,” he said.

“But once a winner is picked out of that steaming shit pile everyone accepts the result because they know it has been judged fair and square.

“Besides, once you hear the winning song reprised at the end of the grand final broadcast you know you’re never going to have to listen to it ever again,” Mr Agarol said.

Stats prove Magic Round a success

NRL chair Peter Beattie (pictured) says a key indicator based on data collected during the inaugural Magic Round in Brisbane last weekend showed the event was an unqualified success. 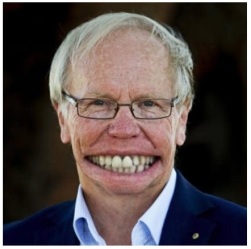 The Magic Round saw all NRL teams play 16 matches against each other over four days at the 52,500-seat Suncorp Stadium.

“In the four days covering the Magic Round I made 357 media appearances across television, radio, newspapers, and web-based news and sports sites,” Mr Beattie said.

“That’s a fantastic result. I usually take at least a week to do that many.”

When asked for data on any other key indicators relevant to the event Mr Beattie looked puzzled and promised to follow-up the inquiry with NRL staff.

Head of BBC Television, Ben E. Hillsho, has offered to resign after the exposure of a massive and lengthy scam perpetrated on viewers in the UK and abroad.

A BBC spokesperson said: “Mr Hillsho did not misappropriate the funds for his own use, but had used the money for other programs.

“I mean, how many times can you show dirt poor Brits popping out sprogs in miserable slum conditions?

“So series two to eight actually were never made. Because the show was so tedious nobody watched it. Every time someone saw it in the TV guide they avoided it, or if they caught the opening titles they quickly switched to something else and only switched back when they were sure it was over.

“Mr Hillsho worked out that there was no need to actually make any more episodes, just promote each new series, confident in the knowledge nobody would twig to the fact it didn’t actually exist. He then used the money to make other more interesting programs.

“Admittedly they were more of those interminable petticoat dramas and gritty cop shows set in some godforsaken, wet, dirty, and miserable, economically depressed town in the middle of nowhere. But, hey, even they are more entertaining that Call the Midwife.”

The spokesperson said the BBC was attempting to talk Mr Hillsho out of resigning and would likely promote him to head the corporation.