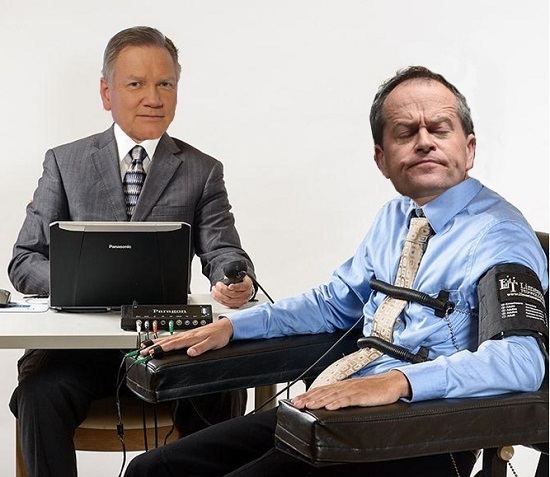 THE worm is dead. He’s been cast aside. His erratic journey across the worm chart on television screens around the nation at election time is no more.

Who wins the leadership debates at the looming federal election will be decided by a far more technical and accurate method.

The Nine Network plans to use an “electric lie-detector test” or “Pollie Graph” if it wins the rights to host and televise the debates between Prime Minister Scott Morrison and Opposition Leader Bill Shorten in the lead-up to the expected late-May poll.

If Nine gets the nod – although Mr Morrison is believed to be pushing for SkyNews and Labor wants a clear legal definition of what’s a lie – both men will be connected to state-of-the-art lie detectors, which in turn will generate power to surge through electric chairs both prime ministerial aspirants will be strapped to.

In a gesture to other networks should Nine get the debates, it will allow journalists from other media outlets, such as Andrew Bolt (pictured above), to operate the machine alongside the usual Nine cohort of experts as well as Laurie Oakes.

“It’s going to be gripping, seat-of-the-pants television viewing,” said Nine’s director of programming Ronnie Reruns. “Dare I say it could be electrifying?

“Each lie will be instantly recorded and send a small electric current through to the two especially designed chairs that we’ve nicknamed Old Sparky and Younger Sparky,” Reruns explained. “With each new lie, the voltage is doubled.

“Now obviously we have no desire to see anyone fatally injured – well, not intentionally anyway.

“A bit like a tap-out rule in wresting, the moment either man screams out: ‘Okay that was a lie!’, the voltage will return to its base level.

“Any death on live television would be totally regrettable, of course, and is only likely to happen if either man through stubbornness or some misguided sense of self-worth refuses to ‘tap out’ so to speak.”

Questions are already being prepared for the first debate, including “Do you really believe in God?” to Mr Morrison and “Have you really ever cared about workers?” to Mr Shorten.

The Nine Network believes there should be two election debates, the second one with the new prime minister Peter Dutton and new Opposition Leader Tanya Plibersek a week after the first.

The Bug has been told off the record by Nine that the equipment worked well in trials conducted with retired Catholic priests who were constantly peppered with questions such as “Have you ever fiddled with kids?”, “Have you ever skolled altar wine by the bucketful long after Sunday communion has ended?” and “What’s it like slipping one to a nun?”

Nine is confident the burnt-out studio set and melted electric-lie-detector equipment can be completely rebuilt in time for the political debates.