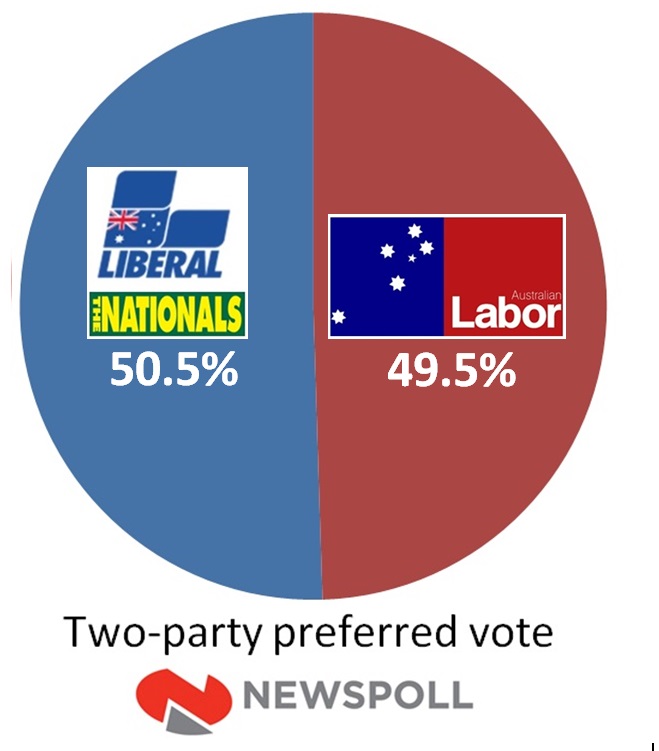 Australia’s gutsy ‘wartime’ Prime Minister Scott Morrison has achieved what his predecessor Malcolm Turnbull failed to do in 43 straight Newspolls: bettering Labor on the two-party-preferred vote.

The #newspoll, to be published in tomorrow’s edition of the nation’s most respected national broadsheet The Australian (cover above) will show the LNP leading Labor by the smallest of margins: 50.5% to 49.5% in two-party terms – the first time the LNP has been ahead since the 2016 election. It is the almost exact mirror of the 50.4% of the 2PP vote the LNP secured at that poll that give them a narrow victory and kept all Australians safe.

And political observers have put the huge turnaround in fortunes to the Morrison government’s “turning-around” of the political issues of the day from political “scandals” whipped up by a desperate Opposition to border protection and national security. These policy areas are enormous strengths for the LNP and the PM’s tactical brilliance will ensure they remain front and centre as the topics de jour in the leadup to the expected May poll.

The paper’s editor-at-large, the highly respected Paul Kelly, will opine in his five-page column tomorrow that the LNP would now be expected to surge further ahead in the three months to the May poll against a divided and dispirited Opposition. 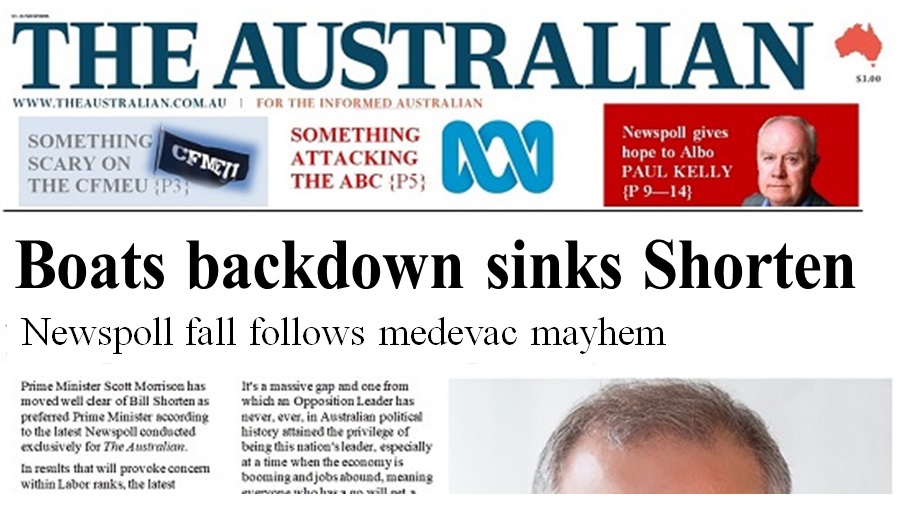 “Labor’s blunder over the #medevac laws is the biggest own-goal I can remember in my 65 years of covering national politics,” Kelly writes. “I’m particularly relieved as it looked there for a while that I’d have to appear fair and balanced like I pretended to be early in the terms of the Whitlam, Hawke and Rudd governments.

“Thank goodness, the voters have finally worked out that Shorten’s a complete failure and is unfit to ever be Prime Minister of this great country of ours.”

The Bug has once again beaten @GhostWhoVotes to the punch, revealing the #newspoll results more than four hours earlier than their usual 9.37.45pm Sunday “leaking” by a sub-editor via mobile phone in a dunny at The Australian‘s Sydney headquarters.

And The Bug can reveal that Mr Morrison has increased his lead as preferred prime minister by a further 5% to 55-30. This is by far the biggest margin this poll.

In the poll conducted from last Wednesday to Saturday, 1645 respondents were asked simply: “If an election were held today, who would receive your primary vote? If it’s the LNP who have promised the keep our borders protected and Australian families safe from the rapists, murderers and pedophiles expected to come flooding over the horizon now that the Labor-Greens axis of evil has virtually abandoned offshore processing with their sinister and unworkable #medevac laws, then press 1 now.

If it’s for the LNP who have promised the keep our borders protected and Australian families safe from the rapists, murderers and pedophiles expected to come flooding over the horizon now that the Labor-Greens axis of evil has virtually abandoned offshore processing with their sinister and unworkable #medevac laws, then press 2 now.

If it’s for the Labor-Greens axis of evil who have virtually abandoned offshore processing with their sinister and unworkable #medevac laws, with rapists, murderers and pedophiles expected to come flooding over the horizon now even though your decent hardworking Christian prime minister Scott Morrison will do everything in his power to prevent that from happening, press 3 now although we’d understand completely if you change your mind, put Australia and your family’s safety first and to ensure your children can sleep soundly in their beds, press 1 or 2 instead.

Paul Kelly also writes of the massive 25-point lead to Morrison as preferred PM: “While I’m surprised the margin didn’t increase by more over the past fortnight in line with the big 2PP swing to the LNP, it’s still a massive gap and one from which an Opposition Leader has never, ever, in Australian political history attained the privilege of being this nation’s leader, especially at a time when the economy is booming and jobs abound, meaning everyone who has a go will get a go.

“Apart from showing that Mr Morrison and his strong, united ministerial team are now beginning to reap the rewards of good, strong, stable economic management that only the LNP has ever been able to provide for this nation, it’s important to once again restate the fact that no Opposition Leader has ever become the nation’s leader from such a poor standing on the most crucial of all Newspoll comparisons, especially if, heaven forbid, a people-smuggling boat should somehow manage to break through Mr Morrison’s Operation Sovereign Borders ring of steel between now and the election.

“The poll results will almost certainly reignite leadership rumours within the Labor Party, with far-left manipulator Anthony Albanese’s numbers men reportedly already phoning nervous Opposition backbenchers,” Kelly will opine in a column given the tick of approval from New York.