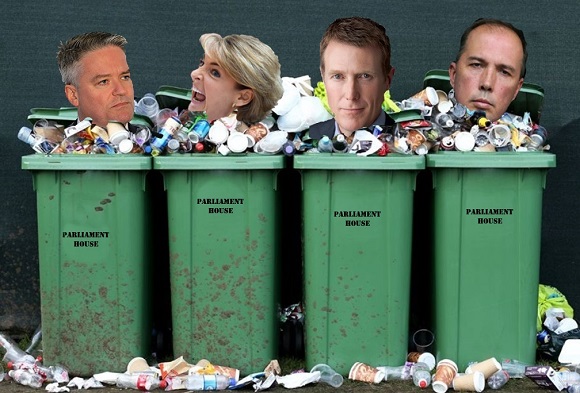 CANBERRA: With less than 100 days to the federal election, the Morrison Government’s chances of re-election have been rocked by a spate of resignations under strict new guidelines for ministerial behaviour that the PM introduced only this week.

Those to tender their resignations to Scott Morrison since Parliament rose late Thursday for six weeks before the crucial Budget session include Senators Cash and Cormann, and MHRs Peter Dutton and Christian Porter.

Their departures will further damage the government following former Foreign Minister Julie Bishop’s shock decision on Thursday to quit federal politics after 23 years. She had been regarded as clearly the least worst of any minister under the Abbott/Turnbull/Morrison administrations.

Ministers to have resigned in recent days and their indiscretions include:

Finance Minister Mathias Cormann, who has admitted that he had racked up a substantial tab in the members’ bar after giving the bar manager, a close personal friend for more than 20 years, his credit card 14 months ago and asking him to “clean the slate” on the bill. Cormann late last night repaid the $25,476 after media alerted him to the outstanding amount but the PM reluctantly accepted his resignation anyway.

Small and Family Business Minister Michaela Cash, who had five times in Estimates hearings previously blamed staff for lavatories in her ministerial wing being blocked with paper from people who are “scrunchers” rather than “folders” before finally admitting she herself was a scruncher and was solely to blame for the blockages. “You use a lot more paper when you scrunch and I apologise unreservedly for the total waste of taxpayer funds, apart from the obvious fact that you smell more too because scrunching never, ever, cleans your arse properly,” a tearful Cash said as she cleaned out her office and shredded many documents and scrunched others out of habit.

Attorney-General Christian Porter, who resigned after admitting driving his car, albeit accidentally, the wrong way on a short section of a one-way carriageway near Parliament “against one of the basic rules of safe motoring, something I should have been aware of as the nation’s first legal officer”, and

Home Affairs Minister Peter Dutton, who submitted his resignation in the early hours of Saturday morning after taking a long, hard look at himself in the mirror of the bathroom of his ministerial suite and finally realising just what a truly dreadful and totally awful cunt he is.

The Bug understands more resignations are likely to follow, including a minister who repeatedly used his soup spoon as a dessert spoon in the parliamentary dining room despite repeated warnings from staff; and a junior minister who tried to have Hansard altered to make a statement he had made in the House earlier in the week read less like it came from the brain-dead moron that he actually is.