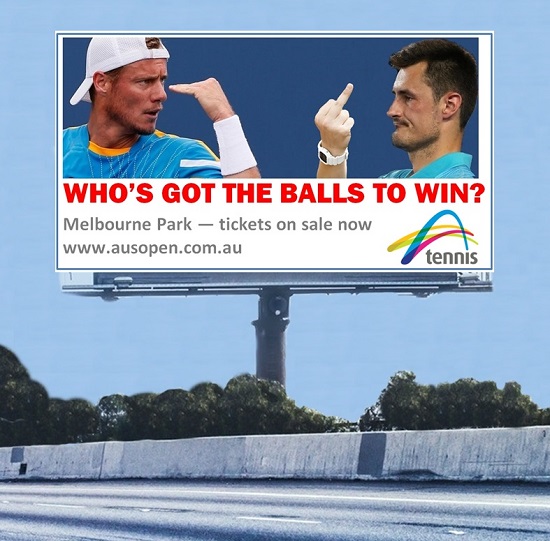 Tennis Australia has come up with a sure-fire plan to get the 2019 Australian Open turnstiles in Melbourne clicking over: a caged  “serve and swerve” fight between Lleyton Hewitt and Bernard Tomic worth $2 million to the winner.

The beauty of the promotion is that TA is keeping quiet about when the dodge-ball style battle will take place at Melbourne Park, saying only that it will be on “one of the main courts before a scheduled match sometime in the second week of the tournament”.

Tennis fans will be none the wiser until a wire cage is hastily erected around the court and both men are armed only with a tennis racket and an unlimited supply of extra-heavy Slazenger balls.

They’ll have five 5-minute “sets” to make their mark on their opponent. They must serve from the baseline for the first two minutes of each “set” and then can move around the court hitting the ball any way they like. Once a man is downed, the other player can continue pummelling his victim until the crowd gives the thumbs up to stop. This is unlikely to happen if Tomic succumbs first. Neither man will be allowed to wear a protector.

TA has already hired a major big-events PR firm to co-ordinate the event. An advertising campaign is being planned around the slogan: “C’mon! Watch a Tomic bomb!”. Working titles to date include “Who’ll cark at the Park” and “Crack it with the Racket”.

As part of the marketing plan “teaser” billboards have already started appearing on major arterial roads in and around Melbourne (main picture).

“It’s why Australia loves him: he’s the quintessential battler,” he said.

Bad-boy Tomic, who recently had his latest Lamborghini repossessed and whose career earnings are clearly rapidly running out as his girlfriends aren’t nearly as pretty as they  used to be, sparked the fight idea after declaring no-one in the sport liked Hewitt anymore and he’d like to punch his lights out.

“Well, here’s his chance,” McFee said. “We know he badly needs some dosh now that he’s playing like shit, so we expect him to come out firing with his big serve. What Lleyton lacks in power, he’ll make up in accuracy.”

Anyone inside Melbourne Park will be able to watch the stoush on big screens for free if they are not at the court selected.

For those around the rest of Australia and the world, television rights are still being negotiated with various cable TV providers. They are expected to net Tennis Australia millions more than the prize money on offer.

BOOKMARK THE BUG FOR ALL YOUR AUSTRALIAN AND WORLD SPORTING NEWS  http://www.thebugonline.com.au