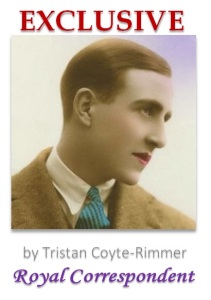 Persistent mentions in gossip columns of a rift between the younger Windsors are baseless, according to The Bug’s own London-based royal observer.

Lately your royal correspondent has been busy on your behalf trying to determine the accuracy of recent mentions in the UK fish-wrappers and Australian women’s rags of a feud or rift between the Duchess of Cambridge and the Duchess of Sussex.

For non-monarchists, and I assume among readers of The Bug there may be one or two, I should explain that the women involved are Prince William’s wife the former Kate Middleton, and Prince Harry’s wife the former Meghan Markle.

Now for many days I have been reading about how Kate and Meghan (pardon my familiarity, but I have almost met both of them on more than one occasion)  do not get along, and how Kate does not like Meghan.

I first spoke to the Royal Family’s press officer and told him I wanted to determine the facts of the matter, while admitting I did not for a moment believe the rumours to be true.

He was very helpful and quickly arranged for me to attend, in an exclusive capacity mind you, a private event in the grounds of Kensington Palace where he promised I could see for myself how well the two Duchesses interacted.

The condition for such exclusive access was that I could observe but not ask any questions.

Fair enough, I thought, they are after all royal personages and are quite entitled, so are therefore also quite entitled to make their own ground rules.

I arrived at the appointed time at the gates to Kensington Palace and was led by the press officer to the garden where, on rounding a tall hedge, I saw a picture of total friendship and relaxed familiarity.

Quickly snapping a photo on my phone camera I caught the Duchess of Cambridge playfully nudging the Duchess of Sussex into the palace swimming pool (main picture above).

Well, the press officer chap said it was a pool but it did have a considerable quantity of water plants as well as some observable fish swimming in it.

The press officer apparently immediately thought I had seen quite sufficient to put to bed the tabloid rumours, and tried to usher me away almost as soon as I had arrived. 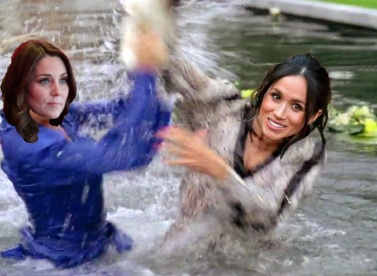 But I lingered long enough to see the Duchess of Cambridge helpfully attempt to restyle her sister-in-law’s hair, in a very vigorous manner using both hands with a very firm grip (pictured).

Then, of all things, Prince William himself appeared carrying a very cute little puppy dog.

He gave Meghan a distinct wave, some sort of secret royal acknowledgment I suspect (pictured) and started talking to his sister-in-law in rather loud tones, although what was being said escaped me. 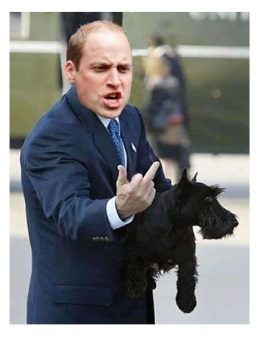 I must confess I was captivated by the little puppy and, when asked, the press officer advised me that the Duke and Duchess of Cambridge had named it Meghan.

A bitch? I inquired, to which he nodded while leading me, quite forcefully I must say, to the palace gates.

But even so I was able to capture a picture of sheer royal playfulness as Prince William helped his wife out of the pool (pictured).

I assume he also helped the Duchess of Sussex out of the pool too. But by now the three royals were out of my sight as the press officer pushed me towards the gates. 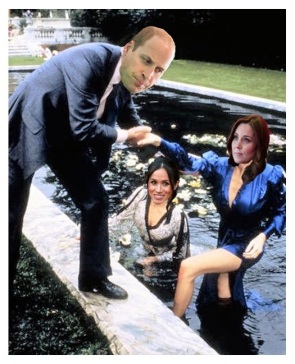 He was chattering away about me not writing the story but he fell silent when I told him that despite the brevity of my visit, I was grateful to have had the opportunity to confirm there was no ill will among the younger royals.

When he heard that he immediately offered me the privilege of attending a charity event that evening at which the Duchess of Sussex was guest of honour.

I was thrilled to accept and arrived well in time at the ballroom of one of London’s majestic old hotels.

The Duchess of Sussex truly sparkled from the moment she arrived and showed off the new royal hairstyle she had been sporting since her encounter earlier that day with her sister-in-law (pictured).

It was a magnificent event and the folks who attended sported the latest fine fashions and enjoyed the best foods, and round after round of the best wines and champagnes.

I understand the event raised several pounds for a very worthy charity whose name escapes me right now. It was something to do with poor people or the like.

Meghan, the Duchess of Sussex, captivated the crowd by delivering a speech flawlessly in English.

A full 14 sentences, yes I counted them as I followed her progress on my previously supplied embargoed copy of her remarks.

The Duchess magnificently uttered every single sentence in strict order from first to last while standing at the lectern and speaking confidently into the microphone.

It was as if she were trained in reading a script. Not a stumble or pause, apart from one when her remarks made reference to the Duke and Duchess of Cambridge.

After saying their names she paused ever so slightly and started an unscripted sentence with “Can’t s….” before reverting to the printed words in front of her.

What a fantastic royal evening. What a wonderful day of royal encounters. I shall remember them forever.