Motivated by the perception among voters that it is dominated by an unrepresentative far-right wing, the federal Liberal Party is issuing new guidelines to its conservative MPs as the 2019 election draws closer.

A Liberal Party source said the move followed the massive shift away from the party seen at the by-election for the formerly safe seat of Wentworth after the dumping of Malcolm Turnbull as the nation’s leader, and in the rejection of the party by its traditional voters at the Victorian state election in November.

The first to receive the guidelines is former prime minister Tony Abbott.

Mr Abbott appeared at the front door of his electorate office in Manly to show reporters the guidelines (pictured). 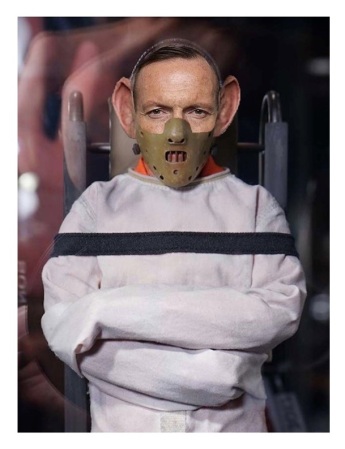 Although he took questions from reporters Mr Abbott’s muffled voice could not be clearly heard through the guidelines.

“We need everyone to be ‘on message’ as the election approaches and we feel the new guidelines will help us achieve that,” the source said.