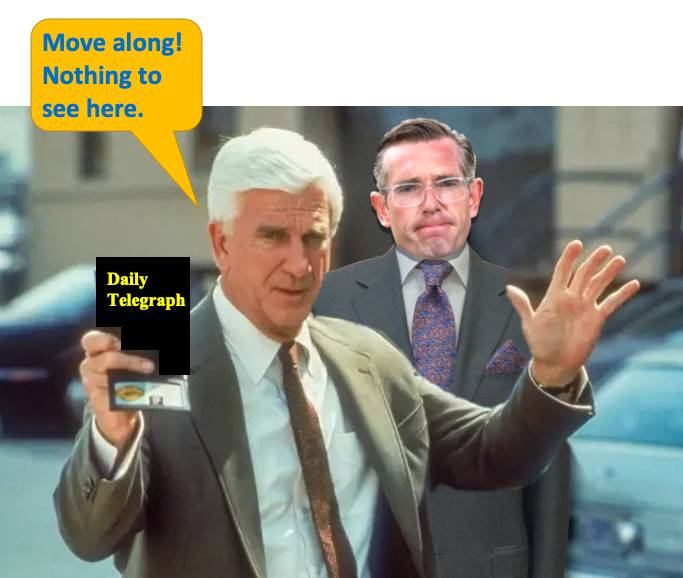 A few days ago our Media Glass House teams brought to you their views on the protection racket the Murdoch media is running through its Sydney turdbloid The Daily Telegraph to help re-elect the NSW Premier Dominic Perrottet at the March 2023 state election.

Just as it did for the Liberal Party in the May federal election, the Tele is clearly intent on seeing its favoured party retain office in the nation’s biggest state.

Further evidence has been made available in the form of the appointment of former NSW deputy premier and ex-leader of the state National Party, John Barilaro, to the position of government trade rep in New York.

The move has prompted a chorus of allegations about political payoffs, favoured treatment, cronyism and other claims including the suggestion that the ex-DP as the state’s Trade Minister stitched up his own post-politics position before he pulled the pin on state politics in December last year.

The Tele, right on cue, did what it does best – slant its coverage to protect a Liberal government.

However, as our MGH researchers correctly point out, slanting coverage can sometimes mean giving an otherwise newsworthy matter no coverage at all. The Barilaro case is a prime example.

His appointment was announced late on Friday 17 June.

Now there’s a clue right there. When governments make announcements late on a Friday it can be because they wish to minimise media coverage of a controversial issue.

Well it certainly worked with the Daily Telegraph.

When other media outlets were immediately barking the allegations of Perrottet’s opponents as mentioned above the Tele totally ignored the story.

It wasn’t until 21 June – after dozens of stories had appear in other media and public debate of the issue had significantly escalated – that the turdbloid carried a tiny story noting the criticism of the posting but saying “senior politicians” had “leapt to the defence” of Barilaro.  The small item on page 10 of the Tele revealed that the “senior politicians” in question were or was the current Deputy Premier Matt Kean. (below)

The issue continued to gain traction in most other media outlets but the Tele stayed silent until 23 June when it informed its readers that all was hunky-dory.

Its second story – appearing after the NSW Parliament’s upper house had formed an inquiry into the Barilaro appointment – quoted the Premier as saying he had not legal basis to intervene in the appointment.

The story may have quoted Perrottet but the headline didn’t use any quotation marks so it presented his claims as fact. (below)

A story on Saturday – only the Tele’s third when the ABC News had published at least a dozen and The Guardian Australia had run at least seven in the previous week – spoke of what evidence may be heard at the inquiry. (below)

Today in The Sunday Telegraph the author of Saturday’s item, The Daily Telegraph’s chief reporter Linda Silmalis used her political gossip column to say “the crisis enveloping the Perrottet government over its ill-advised appointment of the former Nationals leader continues to escalate”. (below)

Yes, it does, and it has been escalating since 17 June.

Our MGH teams make no criticism of Ms Silmalis and wonder what stories she may have filed on the issue that were spiked in the past week or so.

They reckon she probably recognised early on that this appointment was fast becoming a crisis.

And why wouldn’t she since every other media outlet could see it too.

The facts have been staring everyone in the face – except those in charge at The Daily Telegraph who are intent on continuing to run their Liberal Party protection racket until March next year.