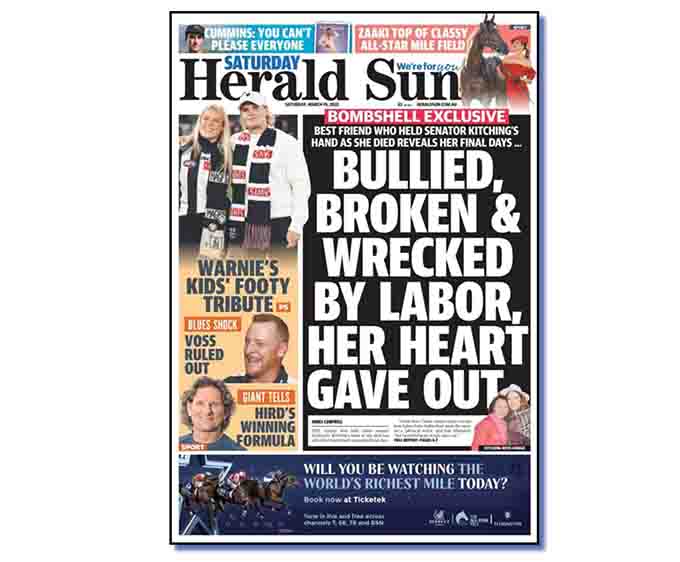 … but our relationship has taken a hit.

I’m referring to Laura Tingle’s story for ABC online late last week where she claimed the Who killed Kimberley Kitching? controversy had “stopped Labor’s momentum in its tracks”.

Really, Laura? Was that your own gut feeling or did Labor tell you that?

Laura: This is not good for you, Albo?

Albo: It’s stopped our momentum in its tracks, Laura!

Or did it come from LNP sources? There’s no attribution so I’m assuming it’s an observation of your own that I desperately need, to preserve what’s left of my sanity, to believe has no basis in fact or logic. For it clearly infers that Labor has rightly taken a hit. That Kitching was bullied by the Mean Girl troika.

As Mark Kenny said on Insiders, there is no evidence whatsoever that Kitching’s death was in any way caused by the stresses of being an MP who may quite rightly have been roused at by fellow party Senators for some of her rightwing views and suggestions she was too close to government folk.

Worst of all, Laura’s comment, whether she meant to or not, puts her sadly in the company of mongrels such as James Campbell in the Herald Sun (at top). I’m sure she has no desire to be there.

My own ever-increasing gut feeling is that allegations of bullying within Labor, stupidly aired by Bill Shorten who should now put a sock in it, would have been a two-day wonder if not for a rightwing media beating it up for all its worth to try to save Smoko’s bacon. And the likes of my Laura – one of the few left who can be trusted to get things right 99.9 per cent the time – joining in is a terrible look.

Laura’s comment also suggests the likes of Newscorpse still have the power to not only frame political discussion but bend it to their will. I will go completely nuts were I ever to start believing that’s even remotely possible.

I still love Laura Tingle; she is one of the few true gems in an endless dross of mainstream mediocrity. If we could clone a score of Laura Tingles and place them in politics-reporting roles in newsroom around the nation, we’d have a much healthier and stronger democracy.

But my ever-increasing gut shouted No! at Laura’s basic underlying assumption in her comment that Labor had a case to answer for its role in Kitching’s death and has taken a hit over it.

There are bullies on all sides of politics – it’s a dreadfully tough business that Kitching might have been wise to avoid as a profession or who, perhaps, should have join the Liberals in the first place – and the only way Labor would have been damaged by articles such as that dreadful piece of fiction writing by James Campbell is if voters believed the ALP has some form of mortgage on bullying behaviour.

Morrison is the nation’s bully in chief and voters know it. His senior ministers are experts at it too.

Maybe it’s simply that I need Laura to be wrong on this. And on that I’m buoyed by the most recent polls taken at the height of this Labor killed Kitching! bullshit that suggest Labor’s momentum is going along just fine, thank you very much for asking.

That’s great news as I desperately cling to the notion that Australians have stopped listening to Morrison and our rabid, right-wing media will not succeed in anything they beat up to billyO in the weeks ahead to give this lying, loathsome, lazy lightweight of a faux-PM a totally undeserved fresh term.

Morrison and the MSM are drowning people clutching at straws if they think claiming Labor killed Kitching is going to rescue the PM at this late stage in the electoral cycle. Nothing else up to now – the constant beating of war drums; the increasingly hysterical personal attacks on Albanese – has helped the LNP make inroads into the big gap behind Labor in the polls.

So, please, Laura, tell me you agree with what I’ve said here – that your “Labor’s momentum was stopped in its tracks” comment was a silly little slip of the tongue – so we can get our relationship back on track.

Virtual hugs and kisses as always! Yours…