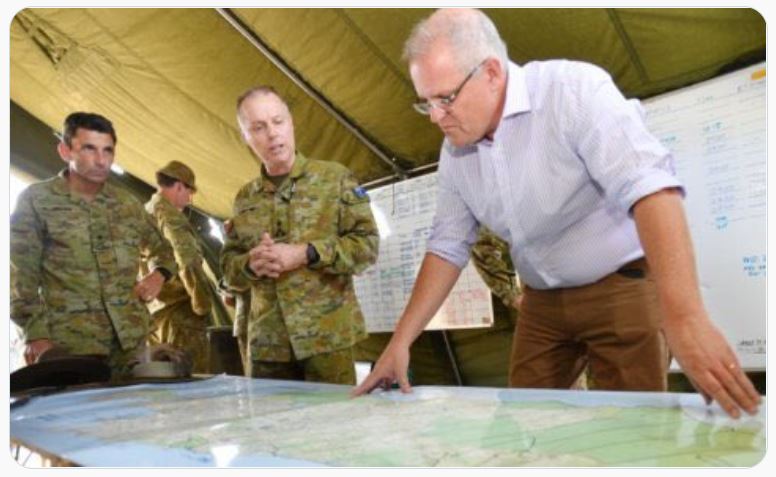 SYDNEY: Scott Morrison is reportedly devastated by the fact that his positive testing to COVID-19 is preventing him from flying to Lismore with his official photographer to comfort flood victims there.

“The Prime Minister as a NSW resident is acutely aware that the people of the Lismore district are not used to floods so what’s happened up there must have impacted them greatly.

“Mr Morrison knows they would have greeted him with open arms, which makes it easier to shake hands then to have to pick them up manually from people’s laps or down by their sides.

“He knows there’s a wonderful opportunity being missed there with the federal election now so close to show his natural empathy and kindness towards his fellow New South Welshpeople in Lismore and environs who, until now, have known nothing about what such widespread flooding can do to their lives and their livelihoods.”

At top: Before his mercy dash to Lismore was thwarted by his coronavirus positive test, Scott Morrison is pictured poring over maps showing the devastation within Lismore city and surrounding farmlands, particularly the suburbs of south Lismore and nearby Kangaroo Island.

MLEBOURNE: Mad as Hell host Shaun Micallef has apologised for the amount of time last night’s show devoted to statements by Prime Minister Scott Morrison over recent days that on the barest of assessments made absolutely no fucking sense at all.

“It’s only a half-hour show,” he explained.

SYDNEY: Police have rushed to a west Sydney location on the Nepean River after reports that an ugly brawl had broken out between a Sikh Volunteers Australia group and an equal number of Pentecostal worshippers from Hillsong Church who both wanted the same site to set up their free-food van for local flood victims.

“We should have known it was a hoax call,” a police spokesperson said as patrol cars returned to their stations or other flood-assistance duties.