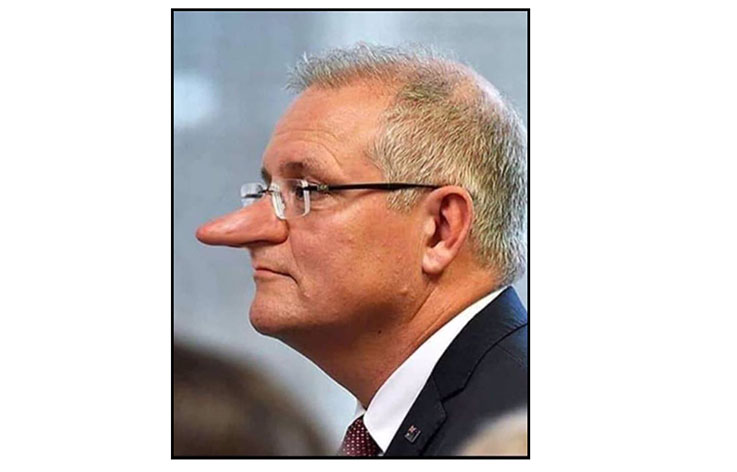 Everyone loves a winner, it seems. Well, in the mainstream mediocre at least.

Over the past two years plus, the MSM’s politics writers and essayists have largely lauded Scott Morrison for his win back in 2019. They thought he campaigned brilliantly and only Morrison himself hinted at help from above.

And not just Newscorpse sycophants either. Those who work for the Nine Entertainment Co’s Herald mastheads have sucked up to Morrison as well. And sadly, too many in the ABC – and I’d regard one as being too many – have joined in the praise.

Even the most trusted of scribes – the likes of Katherine Murphy at Guardian Australia – have occasionally fallen for the line that Morrison possesses marketing and campaigning skills that put him above the pack and therefore remains a formidable foe for Labor come May.

It saddens me as someone who has loved the craft of journalism for half a century that I can’t recall a single mainstream mediocre scribe – print or electronic – who has sat down with Morrison and asked him: are you proud of the campaign you ran in 2019 and if so, why?

While everyone might love a winner, surely how that win came about is important. It should be scrutinised closely for the ongoing health of our political process.

For there’s honourable and fair campaigning and then there’s sneaky, unethical, nasty, despicable campaigning that should never ever be lauded or applauded.

Besides, I’m fucked if I’ve ever seen the faintest hint that Morrison has ever possessed marketing and campaigning skills of any kind at any time in his adult life. And I’m double fucked to see how Morrison or his Pentecostal magic sky daddy had any real role in his 2019 “miracle” poll outcome.

He easily lost the election debates with Bill Shorten back in 2019. He went backwards in the polls during the entire campaign. Some of his media stunts – Labor will steal your weekends! – were outright laughable.

He launched personal attacks against Shorten already badly damaged by a $60 million taxpayer- funded royal comission witchhunt every chance he could and his campaign was largely built on a farago of fibs, a litany of lies, about just about every Labor policy.

Franking credits for an undeserving minority was conflated into a pensioner tax. There was the housing tax. And late in the campaign, the very effective Labor death tax scare that Frydenberg oversaw.

And I’ll mention it before anyone else does: Labor’s perennial election-time Mediscare looked like a kindergarten push and shove compared with what the LNP threw at Labor, with the full support of Newscorpse in particular.

Morrison had the fat slug Clive Palmer’s $82 million, virulently anti-Labor advertising blitz across every imaginable platform, a swag of it in the final week.

And since the election, the billions of dollars in gold-standard pork-barreling – in some cases most likely criminal according to constitutional law experts – have come to light.

There is absolutely nothing about the LNP campaign in 2019 that anyone connected with it should be remotely proud of unless you’re “win-at-any-cost” types – and the mainstream media should have stripped the two parties bare over their actions.

Instead, they’ve gushed over Morrison and his motley crew and they’ve been emboldened to repeat the template this year; improve on it of they can, not that “improve” is the right word for it.

To paraphrase Dennis Atkins on the online news website, InQueensland, the LNP’s personal attacks on Albanese are going to be a doozie, reaching unprecedented levels of nastiness during the looming campaign. Won’t that be wonderful for the health of our democratic processes?

And all the while the MSM will continue to laud Morrison for his marketing and campaigning skills. Doubt that? Here’s David Crowe in this morning’s SMH: “Morrison is a disciplined political campaigner who outsmarted Labor, while Albanese is heading to his first election as leader.”

David, once again, I call bullshit! Who’s the Scott Morrison that you’ve been watching of late?

I”ve seen absolutely nothing in Morrison’s faux campaign of recent weeks that suggest he is either disciplined or effective.

He’s lazy and doesn’t think much about what he wants to say at media calls; hence his constant mangling of words and the brain fades that lead to risible lines such as kids becoming forklift drivers.

In some ways – and I’ve never acknowledged this before – we should all be thankful to the likes of Crowe and Peter Hartcher and Jacqueline Maley at the Heralds, every brownnoser at Newscorpse shit-scared for their jobs, the “Spoken Chris Uhlmann for the Liberal Party of Australia” types in the electronic mediocre, the radio shockjocks, the various versions of Peter van Onselen, etc, etc.

Collectively, they’ve convinced Morrison that he is a very good marketer and campaigner. And in some ways, that’s a good thing.

As a result of that, Morrison genuinely believes that giving a thumbs up from a cockpit window, kicking a footie, downing a schooner, tooting a truck horn, pitching a haybale and constantly calling Albanese a liar – oh, the irony! – will work for him in 2022. The sports-loving daggy dad, the dull-but-kind-uncle-who-means-no-harm routine on rinse and repeat.

The stupid cunt seems totally unaware that Australians know a lot more about him now than they did back in 2019.