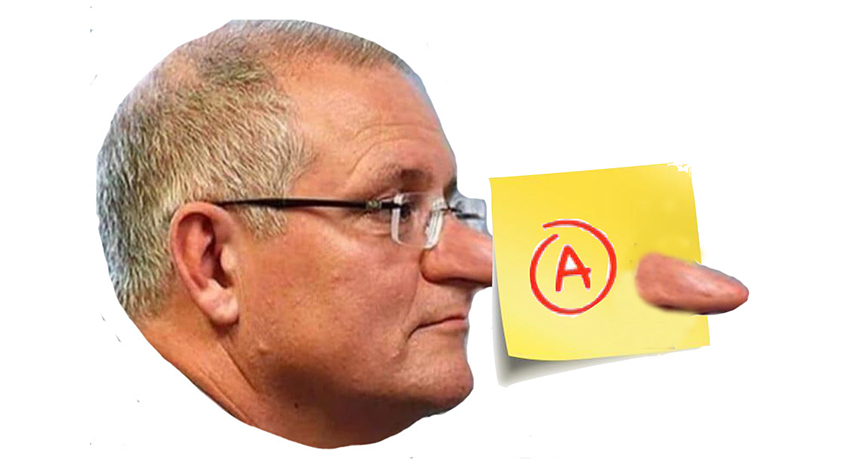 Should the hunt to find the winner of The Bug’s Media Glass House Arse-Licker for December be called off early? Right here? Right now?

In fact, should the overall 2021 winner of the uncoveted trophy also be declared without further ado?

That’s the dilemma facing the award’s panel of judges after The Daily Telegraph’s James Morrow and Clare Armstrong this week presented the strongest case for Arse-Licker glory the judges have seen for a long, long time.

“I don’t think the next turds Smoko and the Dirty Digger want to squeeze out are going to be game to show their faeces for quite some time.”

All judges were amazed at the sheer brownnosery of James and Clare’s tongue-tiring efforts.

“True ringmasters,” said another. “And the sheer delightful absurdity of it all. And it wasn’t just the words. The graphics too played a big role in achieving the perfect main ring event.

“Brilliantly bad from the get-go,” admitted another. “Let’s start with the standfirst declaring that Morrison and his band of top performers stood out from the pack.

“This is rolled gold, gold standard arselickery. Make no mistake here, Buggers. Our Canberra “experts” have included in that band of top performers the entire Morrison ministry – everyone graded in the image above, including a C, plenty of Bs – at least we know what the letters stand for – a D and one left ungraded: Alan Tudge, because he dropped out of school.”

To these two “journalists”, the pack was clearly, if left unsaid, the Opposition Labor Party and its leader Anthony Albanese.

And as for the dux?

“The very idea of making Greg Hunt dux of the 2021 class for his role in the COVID-19 vaccination rollout is coit-cleaning chutzpah at its most clinical,” yet another judge commented.

“What is it they say about trying to polish a turd? If there were to be just one thing among the many fuckups in 2021 of this pathetic photo-op of a government that any sensible, logical person would steer well clear of it’s the Covid-19 stroll-out that was never a race.

“Making Greg Hunt dux for that botched rollout and then try to give a government credit for where the vaccination rates have slowly, finally, gotten to would make any normal, thinking person blush with embarrassment.

“But not James and Clare. They’ll be rinsing out their mouths for weeks with this effort.”

The Bug won’t offend its readers by repeating too much of the risible rubbish from these two Canberra “experts” but let’s just look at the PM’s scorecard.

According to these two dills, the PM’s rollercoaster of a year saw ”a number of mid-year struggles (Brittany Higgins, vaccine rollout) neutralised or turned into net positives.

What fantasy world do James and Clare inhabit if they think Morrison has “neutralised” Brittany’s rape and the vaccination rollout “struggle” and that both have possibly been turned into net positives? Does the all-pervasive stench of faecal matter affect logical thought?

Has anything more cynically political, shamelessly manipulative and brutally, offensively, callous and uncaring ever been said or written about Brittany Higgins’ rape? See how we didn’t throw in “alleged there? That’s because Morrison is now on record as saying it happened. That’s how bad his polling with women must be right now. If only he had known about it months and months earlier, he could have put a stop to the couch steam-cleaning and called in the federal cops right there, right then.

James and Clare finish their report card saying the PM “has ended the year on a high” despite “being dragged down by less able students in the National Council group project”.

We know, we know! We’re trying to find James and Clare’s upcoming standup dates, venues and times because we hear they simply have to be seen live!

If finishing a year six points adrift in Newspoll and in negative 8 approval territory is finishing on a high, we’d hate to see what low would bring.

In conclusion, why should just the shitty, stupid and yet somehow ironically, sadly, very funny words from James and Clare take all the credit for winning this award we suspect is coming their way very soon?

What’s with the graphic for these two? They’re supposedly dishing out performance grades yet they’re pictured in their graduation gowns clutching their degrees.

All this only make sense if those degree certificates are for first-class honours in Arse-Licking 2021, with a Brown-Nosing major.