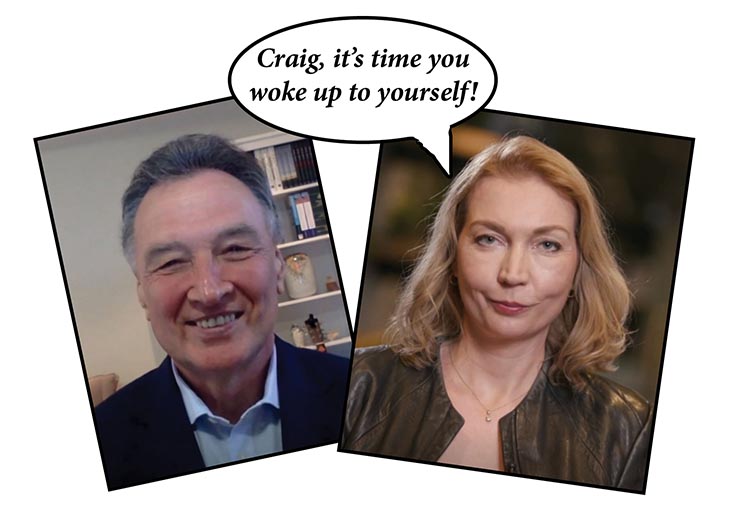 If Scott Morrison’s a larrikin, then I’m the reigning Mr Universe. Check out those pecs.

The notion that Smoko is some sort of anti-establishment working-class knockabout hero was hinted at in Monday night’s ABC The Drum program.

The show had some young fella on who’s done some research into Australian larrikinism and somehow it morphed into a sort of tacit agreement between former Labor minister Craig Emerson and right-wing fruitloop Parnell Palme McGuinness that Smoko’s football-kicking, beer-sucking, truck-driving, haybale-throwing, thumbs-up, “how good is Australia” performance back in May 2019 may not quite have been larrikinism but nevertheless branded him as the boofy-headed. sports-loving bloke next door that allowed him to win that “miracle” election basically all on his own.

I’ve got a lot of time for Emerson but I won’t have a bar of the 2019 poll post-mortem report he co-wrote that can be best summed up by “we’re so fucking sorry we had so many sound policies we developed in the years before that election and it won’t happen again”.

Remember that? Came after Anthony Albanese’s similar “we’ve been so naughty you need to whip us and whip us hard” apology tour of Queensland. Not a lot of Bananabenders were listening as the dumb fucks were busy getting their petrol and diesel work utes and recreational vehicles out of secure storage.

Nor will I ever accept Morrison performed some sort of marketing magic on the 2019 hustings. He got monstered in the debates by Shorten and lost ground pollwise through the entire campaign despite all the photo ops.

Australia’s most inaccurate amateur sephologist – that’s me – remains all on his lonesome in arguing that the polls were accurate on election eve. The big swing came late and Morrison had fuck all to do with it.

It’s a crying shame Labor folk haven’t pressed that argument over the past two-and-a-half years but that’s always been Labor for you. They’ll start campaigning when the writs are issued.

By seeming to praise Morrison’s 2019 poll performance the other night, Emerson unwittingly gave snowflake McGuinness oxygen for her batshittery. She unleashed her usual spiel: her beloved Scott Morrison prevailed because he’s a marketing genius and Australians in 2019 preferred good-strong-stable-that’s-for-sure conservative politics over the wicked policies of progressives who don’t like Australia at all, are terribly unpatriotic and need to woke up to themselves.

To paraphrase PPM, progressives will never win if they foolishly champion rubbishy, feel-good shit like keeping people healthy and well-educated, a belief in humankind’s ability to improve the environment and conditions of life, belief in an obligation to intervene in economic and social affairs in a futile hope of narrowing the rich-poor divide, fair wages to lift people out of poverty, safe and fair workplaces and a belief in the ability of experts and in the efficiency of government buoyed by a strong public service. Moronic losers!

Let’s not fool ourselves. The likes of McGuinness will be relentless in spreading this putrid pile of poop of conservative superiority far and wide over the coming months, turning a blind eye to every lazy, self-centred, blame-shifting, privateer-mate supporting, constant covid catching-up, criminal porkbarreling, climate-change denying, economy stuffing, debt blowing out action from this corrupted corpse that McGuinness proudly calls a “conservative” government.

Let’s hope the current batch of Labor spruikers does better than Emerson, who looked on screen like he was still drumming up new ways to apologise for everything Labor got wrong back in 2019.