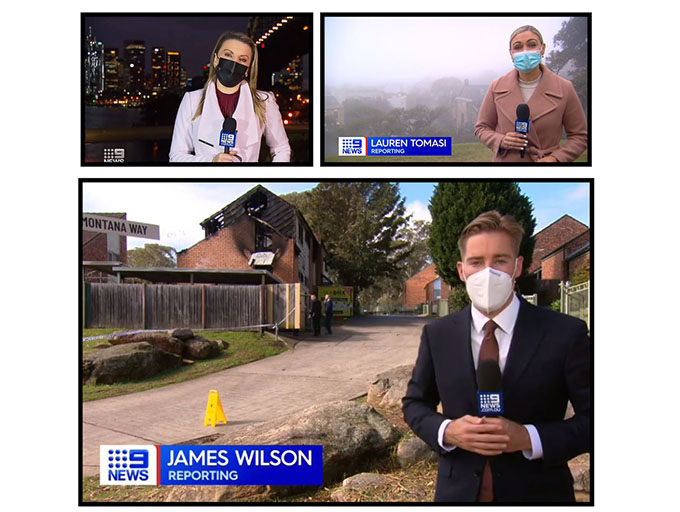 Are viewers with hearing difficulties being punished for the sake of “dramatic visual effect” by television news reporters?

MGH accepts that Greater Sydney is in lockdown and people are required to wear masks outdoors but if those requirements don’t exclude journos doing their to-camera pieces then that should be changed by the powers-that-be immediately.

At top is a montage of Channel 9 Sydney reporters banging away to camera on Wednesday night, giving lip readers no chance at all to take in their words of wisdom. Across town, field journos at the ABC such as the excellent Mark Reddy were also masked up in the 7pm bulletin MGH took in last night.

When these reporters are talking to citizens, fair enough: mask up. But when they are chatting to a camera some metres away being held by a colleague they more than likely travelled to the story with in a car sans mask (our best guess), then let’s give the hearing impaired a chance.

Viewers can be told occasionally of the exemption for those reporters.

Besides, if a retiring deputy police commissioner can chat away to Nine’s Sydney bulletin last night sans mask, the rules can’t be that strict?

Well, their first names are the same so maybe we can forgive BBC reporter Michelle Fleury (below right) for her cringeworthy mistake this week.

“For the last two years, this is where Bill Clinton has called home,” Fleury told BBC viewers outside a Pennsylvania prison where Bill Crosby had just been released after the Pennsylvania Supreme Court threw out his conviction for aggravated indecent assault.

Look, to be fair, both men are called Bill so maybe they are related? Brothers even?

And Clinton was famously renowned as a hound Hillary had trouble keeping on the front porch although Ms Fleury probably regrets there’s no hard evidence Clinton ever drugged women to have his way with them.

A report on the ABC early this morning said the new statue of Princess Diana in London showed her with her two children.

If this is so, who knew that William or Harry were cross-dressers as youngsters?

News Breakfast’s London bureau chief Samantha Hawley got the yarn right a bit later on, saying Princess Di is depicted with three children to pay homage to her fine charity work for the betterment of children worldwide.

The statue marks the fact that Princess Di would in all probability have turned 60 today if she had never met Big Ears.

And finally, a little blooper closer to home.

The state’s Deputy Premier was in fact Health Minister once – but hasn’t been since last November.

Try and keep up, Vanessa. You do after all work for a news organisation with a proud record of accurate, professional, balanced and fair journalism, particularly with its coverage of politics. (insert loud and sustained canned laughter here).