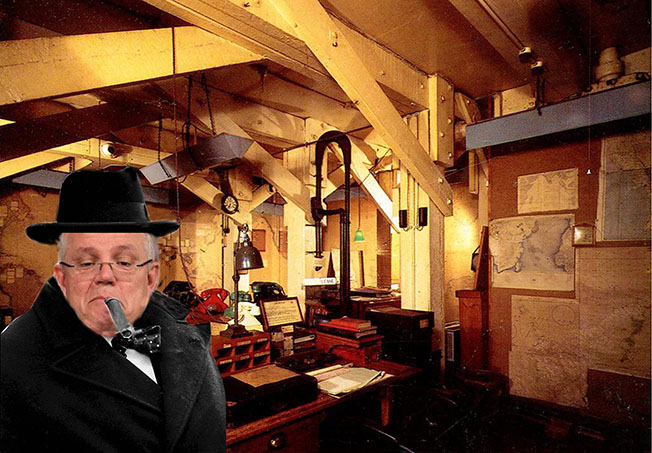 The People’s Republic of China is reportedly breathing a little easier this morning following Prime Minister Scott Morrison’s overnight statement hosing down talk of the possibility of imminent all-out war between Australia and its powerful Communist trading partner to its north.

The PM – touted by some in the mainstream media as the greatest wartime leader Australia will soon have – called in the statement for “a cessation of all this silly war-drum beating that’s been going on between our two great trading partners and allies”.

That’s been interpreted as a significant slapdown to Defence Minister Peter Dutton who said recently the prospect of war with China should not be discounted and who has been seen dressed in army fatigues with a replica F88 Austeyr assault rifle slung over his right shoulder.

He has also been heard in a little-used corridor at Parliament House late at night advancing in review order, by the centre.

Also beating the drums of war has been the man who will soon move across to be General Dutton’s aide-de-camp and batman, the current Home Affairs Secretary Mike Pezzullo who said on Anzac Day that free nations were again hearing the beating drums of war, as military tensions in the Indo-Pacific rose.

In a message to staff who were asked to stand easy and smoke if they had them, Pezzullo said Australia must strive to reduce the likelihood of war “but not at the cost of our precious liberty”.

The Bug understands that the Prime Minister’s more conciliatory approach to the country now regarded by many defence experts as being far more powerful militarily than the United States follows the discovery of a major computing error in war-game scenarios played out by Australian Department of Defence experts in recent times.

Until recently, their best assessments were that in any war declared between Australia and China at, say, midnight, Australia would not be running up the white flag until at least mid-morning that day.

Faulty algorithms were then detected and replaced and the new TOS (time of surrender) has now been assessed at about 3.45am, or 4.23am if the United States gets involved, having decided to abandon its usual practice of waiting a few years to see what happens.