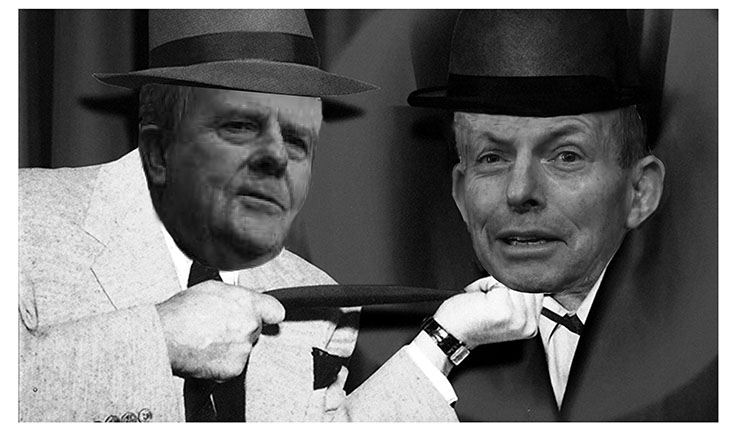 Nine Entertainment chairman Peter Costello and former Prime Minister Tony Abbott have scoffed at claims that changes to the news and current affairs section of Channel 9’s streaming service, 9Now, were made to limit opportunities for The Bug to take the piss out of its news programs.

The Bug reported yesterday that the catchup viewing platform had ditched entire replays of recent 6pm news services from the major capitals, making it harder for it to double check often hilarious mistakes made in those bulletins.

In their place are a number of single clips that Nine claims are their latest news items.

And 24 hours later, those clips have remained unchanged, with one and two-minute yarns from weeks ago including Bindi Irwin having a baby on March 25 and a US tornado and a Victorian shooting two days later.

Nine Entertainment head honcho Peter Costello has reportedly told Channel 9 news staff in Sydney that the definition of what’s the latest news is “really quite debatable”.

“The world’s awash with breaking news each and every day and I think viewers are exhausted by it all. Their concentration levels are shot and we’ve decided to highlight really important news regardless of when it happened.

“In the long run, we hope to replace even those with just click bait stuff, like who’s got the best tits in Hollywood and who got to fuck who on MAFS.”

“Peter was the world’s best Treasurer so he’ll always make sure money is spent wisely,” he reportedly told staff.

“Besides, who determines what makes good news? I had the wonderful idea to bestow an Australian knighthood on Prince Philip and he became a laughing stock!”

STOP PRESS: As this story was being finalised for uploading, The Bug has heard that 9Now’s latest news items will be updated in a few weeks, including clips on Prince Philip to spend some time in hospital and a big container ship that’s blocked the Suez Canal and whether next year’s season of MAFS might have some hardcore moments with tumescent cocks hammering away at moist cunts, all shown close up and professionally lit, just like the show’s moronic viewers have been hoping would happen ever since MAFS premiered in 2015.