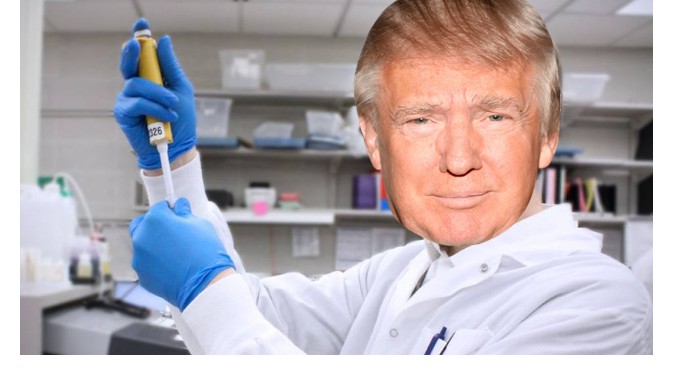 US President Donald Trump says he is working hard on finding a COVID-19 vaccine and expects a breakthrough in “around about one month”.

“Under my leadership the USA has managed this pandemic remarkably well, with very few deaths if you ignore all those that have occurred in states run by Democrats,” Mr Trump told reporters in the White House media briefing room.

“It’s an even better performance if you take out the deaths of people who didn’t vote for me in 2016 but instead supported Crooked Hillary.

“But now that the virus is under control and is no longer a threat I can turn my attention to developing a vaccine.

“The highly qualified doctors and scientists who’ve attend my pandemic briefings all said to me that they didn’t realise how much I knew about the coronavirus,” the President said.

“I had to explain to them that I have always been a very stable genius and I am usually the smartest guy in any room. Period.

“Oh yeah. I’m very smart. Very smart indeed. So in recent weeks after I’ve finished work in the Oval Office I’ve headed down to the basement where I have had a laboratory set up so I can work on a vaccine.

“It’s really not that hard, you know. I don’t know what [director of the National Institute of Allergy and Infectious Diseases, Dr Anthony] Fauci has been grumbling about for all these weeks and months.”

Mr Trump said he expected a vaccine to be ready “just a few days before November 3” but may not be rolled out immediately.

“I’ll have to see where it will have the best effect before I decide where to begin a vaccine program,” he said.

“I mean it could be that we roll it out only in SWING states.”

When asked if it would be unethical and blatantly political to confine a vaccine only to swing states just days before an election, the President bristled.

Reporters then asked the President to explain the acronym.

“Well it stands for States With Infections Needing ….. uh, Something beginning with G,” the President responded before quickly departing the West Wing briefing room.