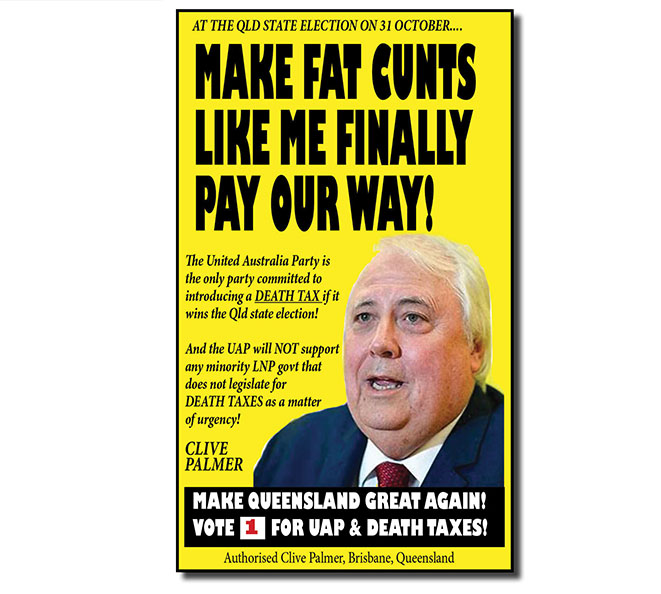 A furious Clive Palmer has vowed to fight an Electoral Commission of Queensland ruling that his latest state election advertisement is obscene and can’t be used for electioneering purposes.

The notoriously litigious businessman says he’ll spare no expense through the court system in opposing this “shocking attack on free speech”.

“My United Australia Party believes it has put together one of the most refreshingly honest political advertisements in Australian history.

“Anyone who knows anything about me knows I truly am a dreadul fat cunt who uses every tax trick, loophole and rort out there to minimise my taxes. It’s all legal and every successful business does it.

“And yet I’m brave enough and ugly enough to realise that a good and sustainable society must get back at cunts like me one day – and death taxes is the logical way to do it through gouging away at my bloated estate once I’m gone.”

Mr Palmer said he had offered to censor the ad (shown below right) but the ECQ had argued that any reasonably minded person would see my photo and know the word being used was cunts.

“Surely it’s reasonable to argue that the word partly dotted out could be chaps?”

Regardless of the outcome of Mr Palmer’s stoush with the ECQ, political analysts have lauded the self-confessed mining billionaire for his stance on death taxes.

“This will bust the looming Queensland election wide open,” one of the Peter van Onselens who comment regularly in the mainstream media told The Bug.

“The United Australia Party’s threat not to support a minority LNP government unless it brings in death taxes immediately is pure dynamite in electioneering terms,” the Peter van Onselen who’s also a university academic said.

“Polls already suggest a minority LNP Deb Frecklington government is very much a possibility and with Queenslanders wanting strong, stable, government in the wake of COVID-19, this will be exploited to the hilt by the ALP.”