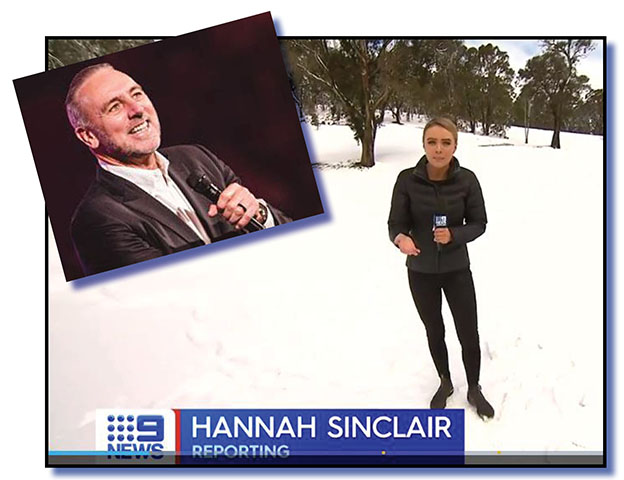 Busloads of bitterly disappointed Hillsong Church worshipppers are now making their way back to Sydney after a fruitless week-long vigil in NSW’s high country waiting and praying for a “promised rapture that never came”.

Their spiritual leader Pastor Brian Houston reluctantly called off “our crusade to honour Jesus Christ, our lord and master and to be taken into His beloved arms” yesterday and ordered his flock of four thousand to return to the church’s Sydney mega prayer and entertainment complex in time for today’s services, concert, singalong and merchandise sales.

The charismatic evangelist explained to The Bug why he had directed his flock to board Hillsong’s fleet of late-model Mercedes buses and head to the Blue Mountains and the northern tablelands a week ago.

“My beautiful bride Bobbie and I had been watching the Channel 9 6pm Sydney news and reporter Hannah Sinclair (shown at top) began her report on widespread snow falls through much of regional NSW with exactly this: ‘The snow fell thick and fast in places not even closer to the clouds’.

“I turned to Bobbie and said: ‘Snow from clear skies. It’s a miracle, sweetie! It’s a sign that the rapture is coming! We’ve got to get the flock out there in preparation!’

“Bobbie’s the sensible one and said straight away; ‘You know, snow can sometimes appear to fall from clear skies?  With wind-drift and all?’

“I said to her: ‘No love, the reporter said the snow was falling thick and fast. It wasn’t that fucking windy yesterday. This is a deadset sign from above.’

“But ever the businesswoman, she said: What about Sunday Hillsong. What about all those CDs, books and other merchandise we simply must sell to keep doing God’s amazing work here?’.

Pastor Houston said they split up the Hillsong big band, choir, usherettes, door security and congregation into two and his wife headed off in 20 buses to the Blue Mountains and he took the rest to the northern tablelands. The merchandise followed in semi-trailers.

He said that after a week out in very cold weather around Glen Innes, he felt pretty silly over “a promised rapture that never came.”

“Still, I wouldn’t have imagined the good Lord above would have much room for many of them anyway.

Pastor Houston said that as it turned out, the week wasn’t a complete waste.

“The kids played guitar and arranged little concerts and bought most of the merchandising – and gobbled up all the meals we provided at a fair price from Guyra, Glen Innes and Inverell pubs.