Over consecutive days now, ABC News Breakfast reports on the woes facing Australian rugby union and the Wallabies due to COVID-19 have run background vision largely of the All Blacks scoring tries over our brave lads.

One sequence in particular shows a Kiwi try that comes from a hopeless Wallabies knock-on with the line wide open (is some or all of that a tautology?).

So, come on, Paul Kennedy. Show some patriotism by using footage of the Wallabies doing well against the lads from across the dutch, or anyone else for that matter, even if it has to be grainy, historic black and white film!

There’s something punny going on at The Courier-Mail in Brisbane.

Former Courier scribe and Queensland Rugby League media hall of famer Barry Dick let us know that in just a few early news pages midweek, Courier subs came up with “Dictator despotly ill” (on Kim Yong-un’s health issues); “Prawns in spot of bother” (on a yarn about a fresh outbreak of white-spot disease); “Anzac Day March on Paws for Bomb Dogs” and “No Gran Is An Island, ScoMo” (on isolation of elderly Aussies).

Taking them in reverse order, the play on “No man is an island” is clever enough, although the Courier spoilt it through its obsessive love of always trying  to humanise the PM with the old “ScoMo” tag whenever it can.Then again, this is the publication that turned Joh and Flo into our lovely country cousins who only ever had the best interests of Queenslanders at heart.

Next is the old “subsitute words that sound the same or vaguely similar ” ploy. Paws for Pause. Get it?

It means the heading doesn’t make sense – one of the reasons we old hands at The Bug aren’t all that fussed over the technique – but that ship sailed long ago. It’s so common now that Mad as Hell has that regular send-up of similar atrocities committed just about daily in Sydney’s Daily Telegraph.

Prawns being in a spot of bother is fine. The heading makes sense and is relevant.

But then we come to “Dictator despotly ill”. Oh, dear …. leader.

Still, we should all be thankful that The Courier-Mail remains to this day a quality compact and not one of those trashy tabloids it vowed never to become.

The Bug’s media analysis team members were stopped in their respective tracks the other day when they came upon a paid advertisement in our national broadshit The Australian.

We have become very accustomed to flipping through page after page of The Oz filled to the margins with news stories because of a lack of advertising support.

But this week we’ve noticed some full-page, full-colour ads popping up on pages usually filled with anti-Labor, anti-ABC, or anti-climate change stories (pictured). 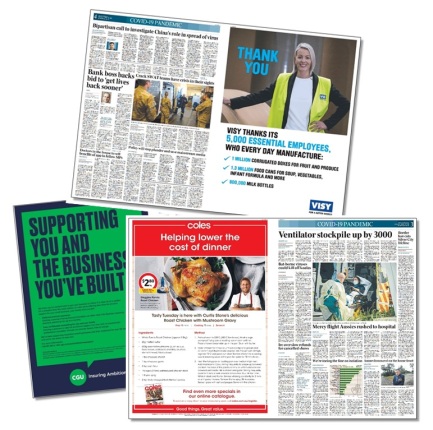 One was inserted by Visy, the paper recycling and cardboard products manufacturer, and thanked its staff for turning up to work during the current COVID-19 pandemic and helping to meet what must be subdued demand for the packaging products Visy pumps out.

It’s nice for a big firm to be so charitable. And by that we mean supporting the usually ad-free Oz.

It’s also nice of it to thank its staff, although we suspect most of them do not fall into the demographic the hard-copy version of The Australian relies on to maintain its loss-leading performance.

This week there were also full-pagers from the CGU insurance people and even a full-page from Coles giving readers a recipe for roast chook — a type of ad that is usually more at home in the News Corp metro turdbloids.

The only conclusion we can reach is that if readers of The Bug are in the market to advertise their goods or services they should ring The Oz’s sales people and ask for a quote for a full-page ad to promote it.

We reckon you might be able to afford it right now.