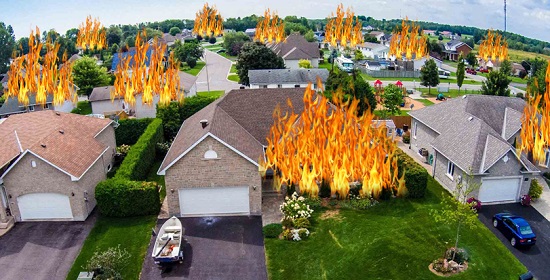 Australia’s summer bushfire crisis has roared back to life forcing federal, state, and territory governments to divert their efforts and attention from fighting the coronavirus pandemic.

The fires re-started yesterday in urban fringe areas around the nation’s major cities and quickly spread to nearby bushland.

As of this morning several million hectares and an unknown number of properties have been destroyed by the rapidly spreading fires.

Officials from the federal government agency Emergency Management Australia have blamed the start of the fires on widely shared social media posts claiming that toilet paper harboured the covid-19 virus.

The messages urged anyone who had hoarded a large quantity of the paper not to touch it but to immediately burn it.

“Just about every fire brigade in cities and towns around the nation were soon being called out to multiple house fires in local suburban and outer-suburban areas (pictured),” a spokesperson for EMA said.

“Naturally these fires spread quickly to neighbouring dwellings and then to nearby open bushland.

“This is the last thing we need right now on top of the coronavirus crisis.”

The EMA official said all governments in the nation recognised the difficulty in responding to the latest fire crisis and its cause.

“We’d really like to mount a massive nationwide social media campaign to let everyone know that toilet paper does not harbour the covid-19 virus,” the spokesperson said.

“But we just know that if we did that, then we’d just start the panic buying all over again as the same idiots replace the stocks of dunny paper they’ve just sent up in flames.

“It really gives us the shits,” the spokesperson said.