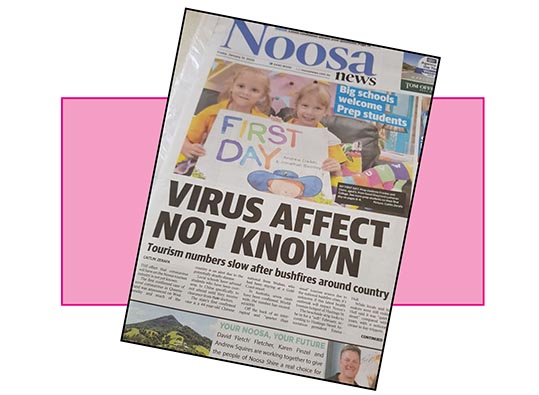 Why should The Bug’s Media Glass House pick on a shitty little coastal Queensland rag that’s probably got bugger-all staff who are probably also overworked, underpaid and under-trained?

Well, it’s a Newscorpse rag, so that’s reason enough. Both Bug barrels then!

We were alerted to this recent front-page shocker by some of The Bug’s Farcebook fiends, who also pointed out that that the paper is also called Noosa Not-the-News and Noosa Spews. Ouch!

We’re intrigued that the journo who wrote the story used “effect” properly in the intro so we can blame a sub-editor for the error.

What effect it’s had on their employment is unknown.

In several previous editions of our Media Glass House we have pointed to the obvious lack of paid advertising in News Corp Australia newspapers.

The dearth of ads is a surefire indicator of the inevitable ultimate death of those previously mighty media organs as production, printing, and distribution costs more than outweigh revenue and buyers and subscribers literally die out or surf for their news for free on the internet. 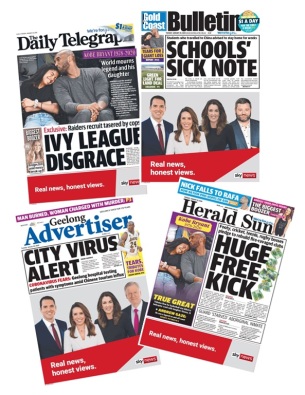 So in recent weeks we were at first encouraged to see so many new ads, some half-page, suddenly appear on the front pages in many of News Corp’s metropolitan and regional dailies – a position that requires advertisers to pay a considerable premium. Just a few of them are pictured here.

In addition to what are normally very expensive front-page ads, there were also full-page ads inside.

We have shown one here that appeared in the usually ad-free national broadsheet The Australian. 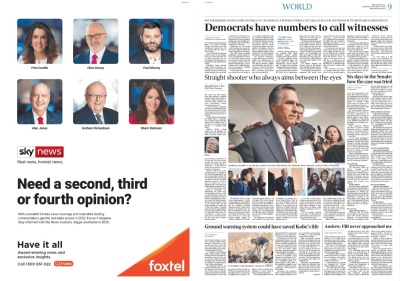 But our feeling of optimism and elation about a turnaround in the fortunes of hard-copy newspapers took only a split second to disappear after noticing the source of all the new ad support for the dinosaur dailies was the News Corp related entities, the pay TV outfits Foxtel and Sky News.

We know there’s not much real revenue in those full or half pages and we suspect their very presence in such volume suggests the pay TV bits of Rupert’s empire may also be in deep shit.

With Niki Savva, Renee Viellaris and Phil Coorey on the Insiders panel on Sunday, the show’s producers and new presenter David Speers have come on with a solution to any claims of right-wing bias. 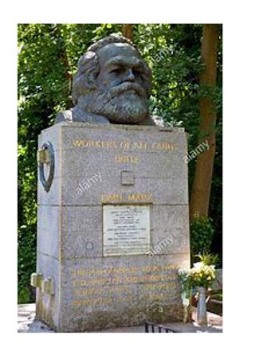 A fourth panelist has been added, with German philosopher, socialist and writer Karl Marx joining in via telelink from Highgate Cemetery in north London.

UPDATE: Ms Viellaris was also unable to travel south to the ABC’s Insiders studio and so will also appear on remote link from the LNP’s Brisbane headquarters.