Our Royal Correspondent Tristan Coyte-Rimmer says Her Majesty the Queen may be forgiven for viewing 2019 as yet another annus horribilis. Here he looks back on a very busy year and the many dramatic events involving the Royal Family.

The first of the many headaches delivered to Her Majesty in 2019 by members of her own Royal Family began almost as soon as the year began when the 97-year-old Duke of Edinburgh was involved in a car crash at the royal estate at Sandringham.

Although the incident forced His Royal Highness to forsake his part-time job as an Uber driver he insisted on continuing to get behind the wheel whenever he chose, although Her Majesty used her royal prerogative and insisted that she drive whenever they travelled together. 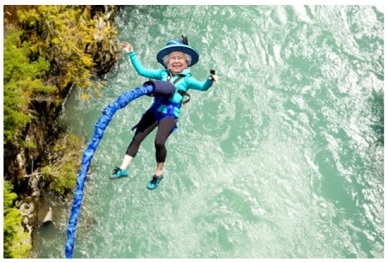 Early in the year Prince Charles marked the 50th anniversary of his investiture as Prince of Wales by shouting his mother, Her Majesty the Queen, to a range of active recreation events.

The Queen spent the day engaged in a range of activities starting with her first bungee jump followed by rock climbing using the “free soloing” technique without ropes or anchors, and ending the day at a relaxing grouse shoot with members of one of the Prince’s charities supporting the blind.

A Buckingham Palace spokesperson said Her Majesty had enjoyed her day out and looked forward to repeating the experiences, although she had been disappointed that the Prince of Wales had not been able to join her because of a sudden and unspecified yet mercifully short illness.

Australia’s Prime Minister Scott Morrison and his wife Jenny visited Her Majesty earlier this year while in the UK for events marking the 75th anniversary of the D-Day landings.

At the meeting the Prime Minister presented Her Majesty with gifts on behalf of the Australian people. 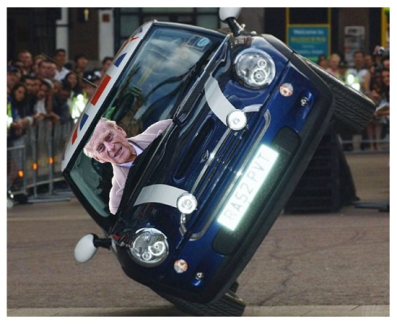 The Duke of Edinburgh finally decided to give up driving during 2019 and The Bug was there when he took his last drive as a licensed UK driver to “pop down to the shops to stock up on some essentials, like gin”.

Outside observers may not have noticed it, but from my position within royal circles I could see that Her Majesty the Queen undertook a subtle campaign to show her displeasure at the choice the UK faced in choosing its next prime minister. 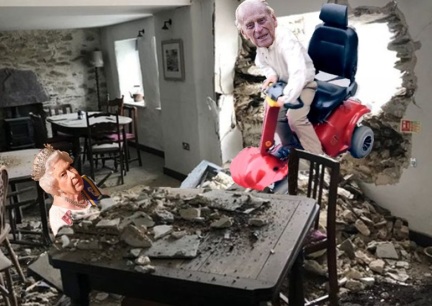 Even though he had surrendered his licence, Prince Philip’s driving continued to cause havoc with one incident at Buckingham Palace almost resulting in Prince Charles ascending the British throne.

The trouble started when the Queen gave her husband an electric mobility scooter for his 98th birthday. The Duke was soon driving around the corridors of Buckingham Palace with the same skill he formerly applied to driving his Land Rover on royal estates and public roads.

“Naturally, it was only a matter of time before we all heard a huge crashing sound and a loud string of screaming obscenities which turned out to be from Her Majesty after she was pinned under debris when the Duke drove his scooter through a wall and into the Queen’s morning tea room,” said one member of the royal household staff.

“If the Duke had been going much faster we would have had King Charles on the throne by now.”

The victory of Boris Johnson in the Conservative Party leadership ballot was delayed when Her Majesty went missing.

After results of the vote were announced and Mr Johnson declared the winner he was still waiting to be commissioned by Her Majesty to lead the nation as PM.

My Buckingham Palace source told me that Her Majesty had repeatedly let it be known in private conversations that she did not support Mr Johnson, describing him as “a fat sloppy lazy bastard” with “an ego bigger than that orange deadshit currently leading the USA” and with “less talent than that pig-rooter David Cameron who got us into the Brexit quagmire of shit in the first place”.

While Her Majesty recognised that it was her constitutional duty to commission Mr Johnson to form a government, she was determined not to make it easy for him.

Poor old Prince Philip came unstuck again during the visit to the UK of US President Donald Trump.

Her Majesty overruled both UK and US protocol officers and insisted that the President be driven personally to his London quarters by the Duke Of Edinburgh in Mr Trump’s personal armoured limousine.

Of course the idea ended in a near disaster (pictured) and Prince Phillip blamed his unfamiliarity with the President’s vehicle for the crash.

During the year the Duke of Sussex, Prince Harry, was forced to defend his and his wife’s use of private jets in the face of criticism that they were contributing to global warming.

The Prince addressed the concerns during a stopover in Paris during a brief visit to France for lunch and some shopping using Sir Elton John’s private business jet.

Shouting over the noise of the afterburners on the jet’s engines – kept running to maintain the correct on-board air-conditioned temperature – Prince Harry said he and his wife, the former Meghan Markle, used non-commercial flights only when their security was a concern.

“On this trip I was concerned that our security could be at risk because of environmental protesters wanting to make a point about my use of private jets, so Sir Elton luckily came to the party,” he explained. 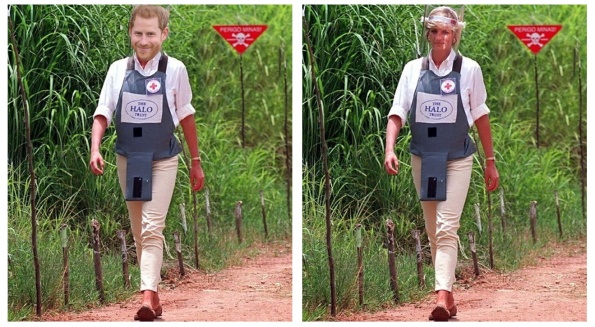 In 2019 Prince Harry’s mental state caused concern for Her Majesty and other members of the Royal Family.

Her Majesty the Queen became concerned when Prince Harry was photographed on a visit to Africa where he promoted an anti-landmine organisation in a setting almost identical to that in which his mother Princess Diana was captured more than 20 years ago (pictured above). 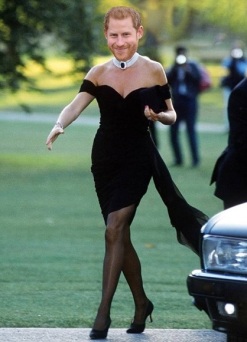 Prince Harry has been photographed at a number official receptions during the visit wearing reproductions of Princess Diana’s other outfits (pictured).

A Buckingham Palace source told me: “The Queen directed a medical team led by her personal physician Dr Abe Dicate to board a Royal Air Force VIP jet and fly to Africa to examine Harry.

But her concerns were soon put to rest when Dr Dicate rang her to say Prince Harry’s behaviour was not directly related to any unresolved issues with his late mother.

The Prince was in fact acting completely normal for upper class British males who all enjoy frocking up now and again.”

Of as we all know, the Royal Family’s year began with a serious car crash involving the Duke of Edinburgh and ended with metaphorical one — the BBC TV interview given by His Royal Highness Prince Andrew, the Duke of York.

No doubt Her Majesty and the rest of her family will know exactly what to do to rebuild public confidence in the monarchy because history shows how well the Royal Family reacts to car crashes.