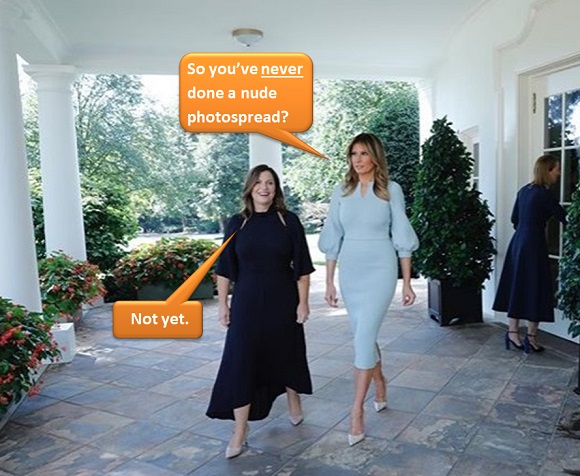 The Bug’s resident sexologist, the world-famous Doctor Dick, has never seen anything like it in 30 years of professional counselling – a series of letters from women happy with their sex lives, totally satisfied by their partners and not in any need of his help. Here are their stories:

Dear Doctor Dick
My husband and I had to travel to the United States for work recently and while there he was lavished with praise from other leaders in his field, especially one my husband greatly respects.

Well, every since then, Scottie … sorry… my husband’s heads have gotten rather swollen, if you get my drift.  The one that counts has been bigger than ever and I’m not the least bit embarrassed to say that our sex lives have never been better. It’s like we’re back in our early dating days as teenagers.

What can I say? With that swelled head, he completes me. He’s filling me up like never before and taking me to sexual planes which I, for quite some time, had considered no longer attainable in, aah, let us say early middle age.

So while I don’t really need any advice, can I hope that this swelled head of his might be a permanent feature, so to speak?

Doctor Dick replies:
Size does indeed matter, and your hubbie sounds like a big knob indeed, and not just in business it seems. Will it last? I honestly cannot say as I’m not a medical doctor but what you are experiencing has some of the teachings from my university days swirling around my head. I can’t remember the Latin but it translated as “long and thin, too far in; short and thick does the trick.”

Dear Doctor Dick
I know this sounds silly but every since my husband was given a new nickname by someone he admires very much indeed, our lovemaking has been out of this world. The nickname was “titanium” man and his lovemaking has been exactly that: his touch has been both light and strong at the same time, if that makes any sense? Ans he now lasts forever.

Doctor Dick replies:
It’s lucky they didn’t nickname him “the titanium hulk” or, for older readers, “the titanium wad” or you might be in hospital right now.

Dear Doctor Dick
I can feel myself blushing as I write to boast about the amazing things my husband can do with his tongue. I can’t understand a lot of what he’s saying with it but it certainly gets me going.

Doctor Dick replies:
In three decades of providing quality advice on sex, I have never had anyone complain about the size of a person’s tongue. Your hubbie has obviously made it the language of love, albeit a very foreign one, but as long as you understand it, who else needs to?