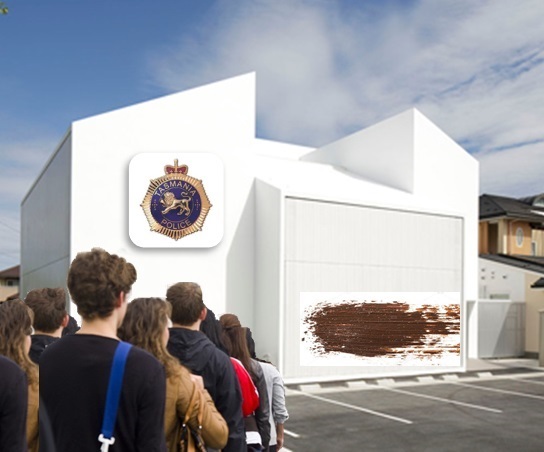 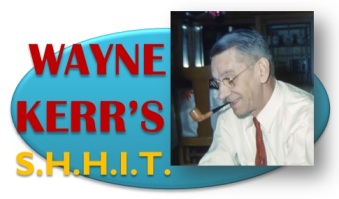 A lengthy investigation by The Bug has revealed the true identity of the creator of a range of public artworks that have drawn large crowds to the streets of Hobart during the current Dark Mofo.

Visitors to the winter festival as well as local residents have been intrigued by the appearance of what have been dubbed “turdscapes” on several prominent local buildings and public spaces.

The previously anonymous creator of the works has used large-scale smears of fresh human faeces on local police stations (main picture) as well as on well-known landmarks such as The Mercury newspaper office in the Hobart CBD (pictured below).

Other buildings to be smeared include Parliament House and Hobart City Council’s headquarters. 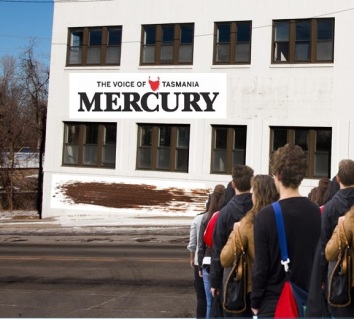 The turdscapes have drawn huge crowds during the festival and have sparked numerous theories about their meaning and their creator.

Dark Mofo spokesperson, Pru Tenshuss, said the works were among the most popular attractions in the seven-year history of Dark Mofo.

Ms Tenshuss said the individual behind the works was clearly a talented artist who had “embraced the concept of Dark Mofo by challenging societal norms”.

“The figurative-narrative line-space matrix evident within each similar yet unique work makes resonant the distinctive formal juxtaposition of the internal dynamic relative to the negative space that penetrates their essentially transient quality,” Ms Tenshuss said. 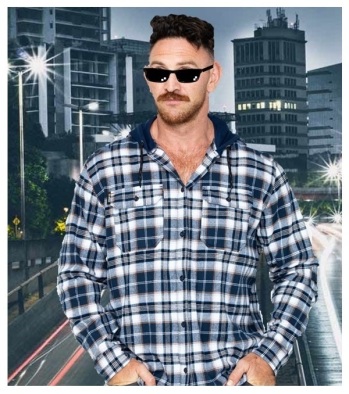 “Their public locality in situ relevant to the realm of discourse makes evident the accessibility of the works as well as their inherent over-specificity especially in light of the eloquence of the metaphorical resonance reflecting their biomorphic forms.”

Following an in-depth investigation lasting several hours including a break for dinner,  The Bug located the creator of the turdscapes, panel beater Doug Flannel of Glenorchy, (pictured) who denied any artistic talent or intentions.

Interviewed in Hobart’s Elizabeth Street shortly after midnight last night while smearing his own faeces on the state headquarters of the Commonwealth Bank, Mr Flannel said: “What’s Mofo? Never heard of it, mate. I just hate cops, politicians, banks, and all those other motherfuckers, that’s why I’m doing the next best thing to shitting on them.”