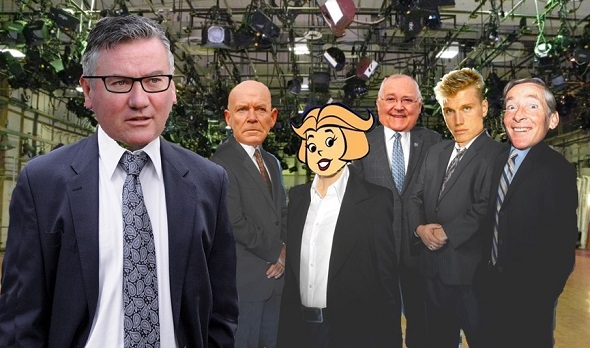 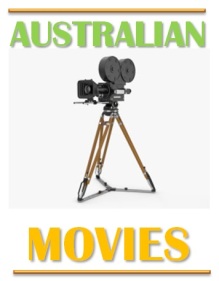 Ubiquitous Nine Network personality Eddie McGuire has been sacked from the lead role in a new Australian film Malcolm Turnbull is bankrolling about his own life and ultimate downfall last August.

But Mr Turnbull said he had already found a replacement lead actor and filming was proceeding with the movie’s release planned for August on the anniversary of his downfall.

Mr Turnbull said he had written the screenplay, was financing the film’s production out of his own pocket, had picked all of the cast, and had given himself the jobs of executive producer and director as well as key grip, best boy, and gaffer for good measure.

The film, My Brilliant Career and How Some People Far Less Brilliant Than Me Ruined It and Deprived Australia and the Word of My Brilliance, is currently being shot on locations around Canberra and Sydney with well-known Australian and overseas actors.

Speaking exclusively to The Bug the former PM said he had found it hard to cast actors in the key roles, especially the lead.

“I definitely wanted people who looked like the politicians they were playing but also had similar characteristics,” Mr Turnbull said.

“Money was no object and I wasn’t fussed if the leads were local or overseas actors.

“I soon picked the original cast (main picture) and we began filming in secret a couple of months ago.

“When I first started planning the film I looked around at the available talent and thought Eddie McGuire had similar handsome good looks to mine and if he popped on a pair of designer eyeglasses you couldn’t tell us apart.

“So I rang him up and said jokingly: ‘Who wants to play a millionaire?’ He agreed straight away.

“Look, I know Eddie’s not a trained actor but you can tell when he pretends to be shattered when a contestant misses out on a sum roughly equal to his weekly wage that he’s a natural.

“Then I thought veteran Aussie actor Gary Sweet was ideal for the Peter Dutton role because he’s played lots of hard men in a very sort of wooden, empty-eyed way.

“A friend in Los Angeles told me Jane Jetson was keen on screen work after having suffered a drought of roles after being typecast in The Jetsons cartoon series in the 1960s. So she’s playing Julie Bishop which is apt because she’s accustomed to playing a character jetting around in a vacuum.

“The part of ScoMo is taken by Ian Smith who played Harold Bishop in Neighbours for many years and another friend in LA told me Dolph Lungren was keen to take on the role of Mathias Cormann, or any role for that matter.

“I really struggled to fill the role of Christopher Pyne until a friend in London told me about Kenneth Williams III, the grand-nephew of Kenneth Williams from the brilliant Carry On film series. So that one was easy in the end.”

Mr Turnbull said it had been difficult to sack Eddie McGuire from the starring role.

“Eddie’s heart was in the right place but unfortunately when he got on set and in front of the camera I found he couldn’t shake old habits,” he said.

“Every line he delivered was preceded by a very, very, very lengthy pause which he claimed added to the drama of the moment. In reality it just added to the length of each scene and the whole shooting day.

“In fact if I had persisted with Eddie in the lead the final version of MBCAHSFLBTMRIADAATWOMB would have ended up at an estimated 19 hours instead of the seven-and-a-bit hours I have planned. 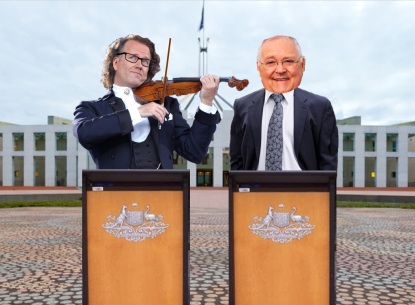 “So I had to fire Eddie and look elsewhere. Then a friend in Amsterdam told me that classical orchestra leader Andre Rieu was keen to broaden his appeal and was looking for film roles.

“I admit he does look like me, especially with glasses on and when we shot a scene with Andre as me as PM and Ian Smith as Treasurer Scott Morrison, I really thought I was looking at documentary footage (pictured).

“Of course I’m still to adjust the screenplay to explain away why I was playing a violin at the time, but I’m sure that’s not an insurmountable problem,” Mr Turnbull said.