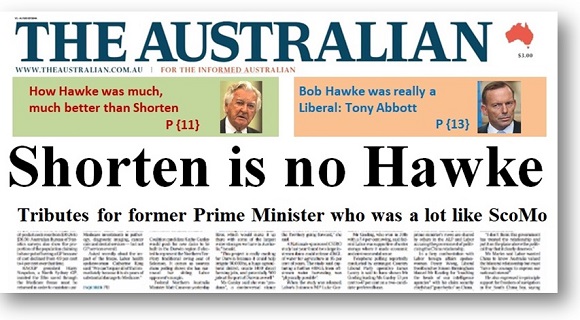 Several senior editors and a number of columnists of News Corp Australia’s metropolitan daily papers were rushed to hospitals across the nation last night following the death of Bob Hawke.

Hardest hit appeared to be the editor of the Daily Telegraph in Sydney, Ben English, and columnists Miranda Devine and Piers Akerman who were admitted to St Vincent’s Hospital and remain under heavy sedation. Andrew Bolt is slowly recovering in a private Melbourne hospital although he remains in  a pompously superior condition.

Senior staff at The Australian including editor-in-chief Chris Dore and columnists Chris Kenny and Judith Sloan had also not been released from St Vincent’s when The Bug last checked.

A News Corp spokesperson said in a previously unheard of phenomenon, all of the editors and columnists simultaneously took ill immediately after the announcement by the Hawke family of the former prime minister’s death.

“We all know acute stress can be a killer,” the spokesperson said. “It appears they all suddenly realised that they would now need to say something nice in their papers and columns about a Labor Party leader, albeit a deceased one, just a day out from the federal election.

“It’s little wonder they all succumbed so suddenly.

“You can’t underestimate the seriousness of the situation all News Corp newsrooms faced last night after the ambulances sped off.

“Losing senior staff such as editors and columnists threw the production of all of our Friday papers into disarray.

“It’s lucky any of them managed to hits the streets this morning, but we somehow struggled through.

“In fact we are all very proud of the efforts of all remaining staff who were not struck down in being able to produce some respectful and touching coverage of Hawke’s death for both the Daily Telegraph (right) and The Australia (at top),” the spokesperson said.