You pretend practitioners of the profession of journalism.

And you, whoever cooked up the stupid, illogical, misleading and unprofessional heading for Caldwell’s splash in yesterday’s Daily Telegraph (above).

And you too, Ben English. As editor, you tweeted the image of the front page as if you and your team have every reason to be proud of it. Shame on you all.

And shame on all of your equivalents at The Courier-Mail (below right).

The whole lot of you – anyone who had anything to do with this risible piece of right-wing rubbish – should get the fuck out of the mainstream media game and stay the fuck out of it. 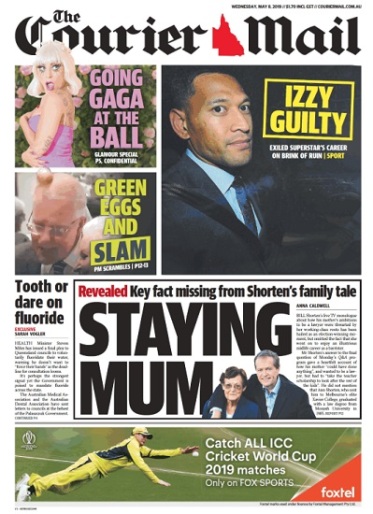 While you remain, you are the pond scum of our profession. You suck the oxygen out of it; you poison the reputation of the craft of journalism; and could almost make me ashamed of the print-media career that has been my entire adult life if it hadn’t been so exemplary.

In all those decades, the things I have admired most about the countless colleagues I have worked with were their commitment to accuracy and balance and their clear and logical thinking.

That second quality is what helps a journo sift the wheat from the chaff. The substance from the bullshit.

In that Tele front page splash, two pages inside and an editorial the Tele‘s pack of lightweight propaganda pushers have shown not a skerrick of that. The Courier is no less to blame for picking that sludge up and trying to smear Shorten with it as well.

Let’s look at the Tele heading, after a brief summary of Caldwell’s piece. Shorten is guilty of something – I don’t think even the Daily Telegraph knows exactly what – because while talking about his mum on Q&A on Monday night, Shorten didn’t mention that later in life, Ann Shorten went on to have an “illustrious” career as a barrister.

And the paper’s reporter in a comment piece editorial accused Mr Shorten of “a slipperiness of detail” while the paper’s editorial claimed he was not letting “the facts get in the way of a good story”.

Is that a fair enough summary, Ms Caldwell? Some deliberate and sneaky omission of detail – a “missing vital fact” as the front-page jockey line declares – that the Opposition Leader kept from us all?

Back to that heading: “Mother of Invention”. It’s tacky It’s meaningless. It’s stupid. It’s offensive. And as I’ve mentioned above: totally illogical.

Did Mrs Ann Shorten invent Bill? No. Can we agree she gave birth to him almost exactly 52 years ago? I think we can. Is Bill Shorten’s nickname Invention? No.

Is the heading saying Shorten invented something, Ms Caldwell? What was invented in the retelling of that part of his mother’s life that he shared with the Q&A audience on Monday night?

The answer is nothing. He certainly didn’t invent anything.

Shorten has told the whole story of his mother’s influence on his life from time to time.

On Monday, he was perfectly entitled to talk about that part of his mother’s life that I suspect most influenced his approach to life and his political philosophy.

I’m sure if time had permitted on Q&A, he would have loved to have talked about her mid-life career change to the profession she had wanted since she was young.  She chose teaching to help look after her siblings.

I’ll wager one thing: when Shorten reacted to Rupe’s rotten rags yesterday, the pride he showed in his mum’s mid-life career change and how she handled the hurdles she faced as a mature aged lady lawyer would have been something he would have gladly canvassed on Monday night.

As a clearly emotional Shorten pointed out, Ann Shorten’s “illustrious” career as a barrister wasn’t that crash hot. She turned to other things before her death at 79 five years ago.

Shorten’s mentioned this all before. They were facts that the Daily Telegraph and The Courier-Mail could have easily discovered if they had any interest in all at pursuing that most basic of journalistic endeavours – checking the facts. Or to take the advice Ann Shorten often gave her son: “Look it up!”

Trying to find fault with what Shorten said was a shameful, targeted beat-up that just about every scribe I’ve ever known would have found distasteful and beyond them. They wouldn’t have gone anywhere near it. In my day, they would have politely declined to write it.

And let’s not even start on using the life of a woman who appears to have been a fine, hard-working and decent Australian who achieved some remarkable things to try to besmirch Shorten who clearly loved and still loves her dearly.

What I find devastating , bewildering and incomprehensible is that in the entire editorial structure of the Daily Telegraph or The Courier-Mail, there was no-one with a modicum of integrity, professionalism or decency prepared to call out the whole article and its treatment for what is was: complete and total bullshit.

I don’t know what any of you people look like, but I can in my mind’s eye see all your noses and a lot of your faces smeared with Rupert Murdoch’s shit.

I see you all wearing leg ropes so someone can pull you out if you disappear completely up the greedy octogenarian Yank cunt’s arse.

I see you as a lot of things. And journalists is most definitely not one of them. 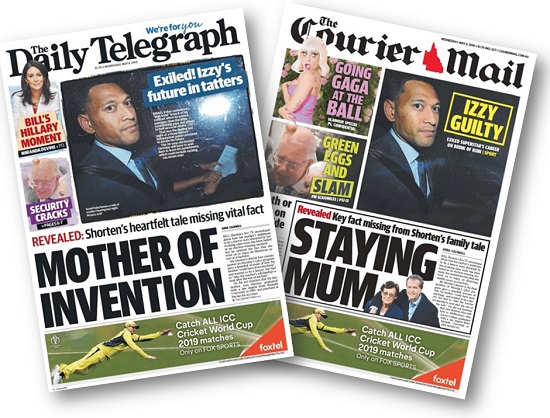