The Federation of Labor-Opposing Political Scribes – the organisation that covers all political reporters and columnists in Australian media – has finally settled on the messaging, both direct and subliminal, that its members will send out for the remainder of the federal election campaign.

The Bug can reveal that FLOPS developed the messaging strategy in a series of chat-room discussions with all of the association’s 213 working members, supplemented by an exhaustive survey through the federation’s website, news.com.au/flops.

And this paper has been handed exclusive transcripts of some of those chatroom conversations between the FLOPS executive and members as the strategy evolved over recent weeks.

Below are some of those conversations and astute Bug readers might detect how some of those strategies have already been put in place in recent times.

Chris Uhlmann (Channel 9 and FLOPS chairperson): Hi everyone, let’s not fool ourselves. We’ve got a big task ahead of us in 2019 if the polls are correct.

Renee Viellaris (The Courier-Mail): Just tell us what else we can do.

Uhlmann: Thanks Renee, Annika. Our mission in 2016 was difficult enough. We managed to keep Labor out with two main subliminal messages that backed up the general LNP campaign strategy thrust – that having six different prime ministers in six years would make Australia a laughing stock internationally – as bad as Italy; and that while Malcolm Turnbull had turned out to be quite a disappointment, he’d come good if the Australian electorate gave him one final chance with a mandate in his own right.

Steve Wardill (Courier-Mail): They were indeed good times. I loved the way you guys at the ABC especially finished your reports with those sorts of messages, as if you were giving a final summation of government policy even when you weren’t. Very professional.

Uhlmann: Yes, appreciated. Ta. But that was then and now that Fiz… I mean Turnbull’s gone…

Jennett: That’s for sure, Des. But hence our problem in 2019, people. We’ve got to come up with something new. Now please, everyone, I know it’s old school but the executive thought we could just go back to a bit of the old push polling. It’s always worked in the past.

Dennis Atkins (Courier-Mail): I really can’t see that working this time, fellas. The margin’s quite large.

Houghton: That’s right. What on earth are we going to do extra to turn things around? I’ve been writing some really top-class shit about the criminal CFMEU having Shorten in its pocket, and Albanese breathing down Shorten’s neck and Shorten being a real cunt and everything and the polls have proved to be very stubborn. I’m fucked if I know why.

Viellaris: That’s true. Everything I’ve retyped about Shorten over recent months to back up the LNP mantra that he’s a liar and serial taxer doesn’t seem to be working.

Uhlmann: I still think it’s our best shot. Let’s all work into our stories and columns somewhere, preferably towards the end, that the Liberal Party internal research is showing that the margin between the two major parties is narrowing day by day.

Sharri Markson (Daily Telegraph): That the LNP is gaining in confidence that its main messages are starting to resonate with voters?

Peter Hartcher (Sydney Morning Herald): That people have finally woken up to Bill Shorten. About time too. And that voters are warming  to ScoMo? Like it. Like it a lot.

Fran Kelly (Radio National): That Shorten and Labor’s high-taxing, high spending policies will grind our nation to a halt?

Viellaris: And we can still retype powerful attack stuff without attributing it to anyone? Cool.

Atkins: I still think it’s going to be a tough ask. Will I and Malcolm Farr still be required to play the token voices of reason at our respective mastheads?

Malcolm Farr (Daily Telegraph): Yes, I’m sick of doing that. No-one will talk to me.

Shane Wright (The Age): I feel your pain, comrades.

Mark Kenny (Sydney Morning Herald): I think you’ve all got a good point there. Why not everyone go in hard? Shit! I mean, really, any semblance of fair and balance reporting by New Corp rags … well, that boat sailed a long time ago…

Atkins: It’s not as if you pricks at Nine are far behind us lately….

Atkins: Sorry. But it’s been doubly hard for me now that Paul Syvret’s left the Courier. Terry’s [Sweetman] only got a weekly column so it’s bloody hard work playing the old leftie goody-two-shoes all the time virtually on my own, just to give all our right-slanted stories added credence.

Michael Stutchbury (Australian Financial Review and FLOPS patron): I know, Dennis and Malcolm, that it’s been hard for you both. It’s shit work trying to write fair when everyone else is just having so much fun, but someone has to do it. Look, just keep it up for another month and I reckon we can consign Labor to the electoral dustbin just about permanently. I mean, if fucking Morrison can lead the Libs to victory this time round, anyone can for as long into the future as any of us are likely to ever see.

Atkins: I still think you guys are going to need more.

Laura Tingle (ABC 7.30): I think a really good line of attack would be to highlight the problems Labor faces with its big-target policy, you know, with all the policies they’ve had out in the public domain now for so long and the costings difficulties that will come with that? I mean, really, why would any party that looks a dead cert to win want to spoil their chances by having policies?

Leigh Sales (ABC 7.30): And I  fucking know Fran and I and others want to fucking keep pushing this fucking idea that while Labor’s negative fucking gearing policies might have been fucking okay in the fucking good times, they’re not fucking suited to today’s fucking depressed property markets. I’m fucked if I know why the fucking Libs aren’t fucking pushing that more.

Jennett: Excellent idea. Anyone else?

Andrew Probyn (ABC): I think it would be good to repeat over and over that Shorten is now aware he’s got a real fight on his hands because Morrison is much better on the hustings than Turnbull ever was.

Atkins: Milo Kerrigan would have been better on the hustings than Turnbull ever was!

Rob Harris (Herald Sun): I guess we’re all going to completely ignore the shit job the government’s done on the economy, just like we all did in 2016?

Stutchbury: Not a word, okay. We’ve got the government’s reputation as far better managers of the economy to protect.

Chris O’Keefe (Channel 9): We could constantly remind voters that the government is successfully chipping away at the Opposition. I’m sure the Liberals would tell us they are.

Matt Doran (ABC News Breakfast ): Have we got any plans to make Morrison more likeable?

Jennett: Matt, let’s stick to things we can influence, okay?

Viellaris: I like the general strategy but what if, say, we get to two weeks out from polling day and the polls still tell us it’s not working out? We can’t just rely on the usual push-polling from Newspoll towards the end of the campaign?

Stutchbury: Well, we’re just going to have to go scorched earth, people. The usual black hole yarns on Labor’s costings. And we’ll have to ramp up the personal attacks on Shorten. That he’s a dog fucker and a wife beater. Hopefully the LNP will do some of that stuff too.

Viellaris: I think I might have already retyped those. Look, I’ll do what I can to up the ante on what I’m doing already. But I’ve got my reputation to think about and I don’t want to become a laughing stock. 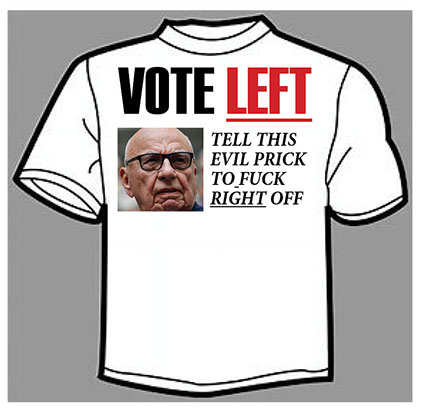