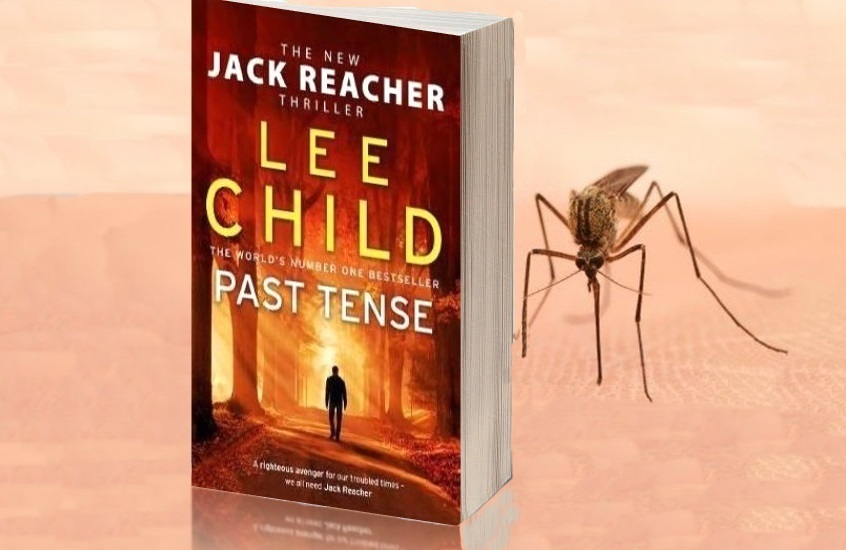 Don Gordon-Brown, award-winning author in his own right*, passes judgment on the latest Jack Reacher novel from the prolific pen of the world’s claimed No.1 fiction writer Lee Child.

“If you’re running out of stories to put up on The Bug, why don’t you do a review of the new Jack Reacher book, Past Tense, by Lee Child?”

Don’t get me wrong. It was a good idea but words are valuable to me. I say them only when I need to. I’m not overly taciturn but it’s my fists and my feet that normally do the talking. And the walking. That’s been the case all my life. Besides, very few words make for very short sentences such as….

Or even a pairing such as…

I said nothing back.

…that can certainly fill out a review fairly quickly, especially as I might expand on the suggestion and review every new Jack Reacher that comes out every year from now on, as regularly and as predictable as my new year’s resolutions to lose some weight.

The idea had come, by the way, from my missus. Tall, striking, blonde woman. One of those women that’s very difficult to guess an age of. Tricky and can land in you in all sorts of trouble if you’re foolish enough to try. And just as dangerous as some of the scrapes I’ve gotten into over the years. Probably older than she looks. And she looks young enough. A pleasant face dominated by attractive blue eyes that shout she’s seen a lot and been through a lot. But who has come out the other side older much wiser and better for it. No spring chicken. But not over the hill yet by a long shot. Drop dead gorgeous. A lovely set about her too and that always helps.

“Yes,” I said. “Good idea.” My wife often has good ideas. And she’s the reason I can even contemplate doing a Jack Reacher review in early 2019. Before meeting her, I was a drifter. My days as a sergeant in the Citizens Military Forces, as the Army Reserve was then known, long behind me, my thumb was my mode of transport.

My destination was where the car of the next driver who picked me was pointed towards. I was as likely to end up in the deep north in monsoon season as some freezing cold hole in Tasmania in the dead of winter.

That changed the moment I saw my life partner as I chowed down at a table for just two, facing the entry and exit as always, at a greasy spoon just outside Gympie a life ago now. She has often said I’d be dead now if I hadn’t met her. She could well be right.

“Why not,” I added in confirmation before heading off in search of the copy of Past Tense a relative had given me over Christmas.

I said nothing back.

I instinctively knew that it was 4.42pm and so I’d be able to get a good start on the book before dinner. Or tea as it’s called where I’m from. I don’t have a watch or a phone and we don’t have any clocks in the house so how did I know it was 4.42? My military training. Tick tock. Tick tock. An inbuilt clock that has kept me alive in some circumstances when all logic suggested I was a goner.

Tick tock. Tick tock. It’s a handy skill set to have when timing is everything. When it’s of the essence. When it can be a matter of life or death.

I’d already worked out the mechanics of my review. I’d use a lot of short, sharp sentences. Two or three words. Just like that. For easy reading. Easy as. But I’d throw in the occasional longer sentence, if not to add variety then just to show I can. Just like that. Then back to brevity. Quick, sharp ideas. One after the other.

But you’ve got to discount for short chapter openings and endings and a lot of short lines of very abrupt dialogue, such as:

I call it Child’s play, which is why I always discount a Lee Child book by 21.4% because of those factors. I immediately knew it was going to take one hour, 47 minutes to read the whole thing. But that’s if nothing went wrong. Which it was about to.

I was about 60 pages in when I first saw them. Above me. In a pack with clearly hostile intentions. Four, no, five scotch grey mosquitos – Ochlerotatus alboannulatus – watching me intently. Hovering just out of range. Blood clearly on their minds.

How did I know the scientific name of the Hexham Grey or Scotch Grey mosquito, depending on what college you went to? I just did. The cane toad is Bufo marinus. The blue whale Balaenoptera musculus.

Who needs to know these things? You never know when it might help. Like knowing the scientific name of the ironbark tree Eucalyptus atrata, native to Queensland. Not important?

Back in the day leopard-crawling through a dry Sclerophyll forest during the bitter Wacol campaigns, do you think it was important to know not just the size of the rounds and the velocity and frequency that the likely weaponry of your imaginery enemy would spit them out at you? And of the local vegetation, which were of the hardest woods that provided the best cover and might just save your life? The ironbark. Also known as the Herberton ironbark. Did you know that?

Of course you didn’t. Silly question. But back to my current dilemma. I was angry with myself for not foreseeing the possibility of this deadly standoff. Someone had clearly left a screen door open. But I quickly snuffed out such negative thoughts. Now was not the time for recriminations as to how I had forgotten my basic motto: Hope for the best; plan for the worse. It was time for clear-headed and strategic action.

“Well, fellas, it certainly looks like blood is going to be spilled here today; the question is whose?”

Said for no other reason than to keep them at bay for a few seconds more. Allow time for some old-fashioned hand-to-proboscis strategy to take shape. And maybe just put a little bit of doubt in their minds as well. That never hurts. It was also working.

They bunched up a little, which is where I wanted them. Their movements also told me another important fact: who their leader was. The big grey bastard in the middle became my focus. Take her out and two others would fly in to try to revenge her demise. Dispatch them and the final two would fly away. It’s nature’s way. Be it mosquitoes, Bengal tigers, black mambas or 300lb corn-fed ex-college football players slightly gone to seed but who still fancy their athletic prowess.

I slowly slipped my legs off the couch while eye-balling the ringleader. I needed leverage. Which meant I needed both feet planted firmly on the floor.  An ability to move in any direction when the attack came. And I knew that wouldn’t be long now.

They were now close enough so I could hear their buzz of angry anticipation. I put out both hands, palms up, and mocked them further with a “give it your best shot” rapid movement of my fingers. The eyes of the leader narrowed and then she attacked. With a blistering speed that a conjurer would envy, my hands came together and squashed the little bugger centimetres in front of my face.

I swivelled instinctively to the left to repeat the process as the second mosquito charged in, and reversed positions to account for the third. The backups always come in from alternate 30-degree angles. Always.

Slap. Slap. Slap. It was all over in under two seconds. The last two mosquitos fled into the darkness outside the range of my reading light. I knew they wouldn’t be coming back. They never do.

Why do I know such things? Call it a gift. Aided by a profound knowledge of the natural world that surrounds me, and of human nature itself. I once helped out a law enforcement officer pal whose prisoner had escaped detention from a Brisbane cell. I thought about it and said he’d be holed up in a motel just six kilometres from the outskirts of Albany in West Australia, on the left hand side of the road heading back to Perth, I gave her the room number and what he’d ordered for his breakfast the next morning. I missed the fact that he had doubled ordered toast – no one’s perfect – but I was just glad I had been able to help.

But back to Past Tense. I settled down again and resumed my reading. This really was a strange Reacher book. Nothing much had happened in the 146 pages I’d now read. Jack hadn’t killed anyone or fucked anyone either. That had happened before, but not in a novel that makes a glacier look like it’s speeding.

Don’t get me wrong. I love Lee Child’s work. I love the Jack Reacher character. I think we have a lot in common even though I look nothing like Tom Cruise. Man-mountain men of action and honour. Righters of wrongs. Looking after the interests of common folk. No interest in money or material wealth. Happy to wear the same stinky clothes for three days until I’m told not to anymore.

I was just hoping Child hadn’t run out of steam because Past Tense was far from his best work. In fact, the more I thought about it, Past Tense was shaping up as shit. Absolute crap. I started looking up at the ceiling for more mozzies.

I guess I was hoping Child would come home with a wet sail. But it was not looking good half-way through. Still, I found it hard to criticise an author I had always admired.

Maybe I should have said nothing.